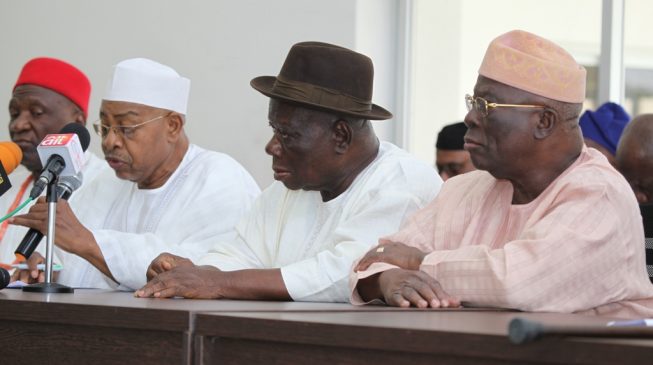 Nigerian southern leaders comprising of the south-south, south-west, south-east and middle belt Saturday met in Yenagoa and reiterated the need for the country to be restructured.

The renewed call by the leaders was the outcome of a mega rally organised by the Pan Niger Delta Forum (PANDEF) in Yenagoa, Bayelsa state.

They said restructuring is the best solution to the current challenges confronting the country.

Edwin Clark, leader of PANDEF, speaking at the rally said what they were asking for is fair treatment to all Nigerians.

“Nobody is more important than any other person in this country, every Nigerian is equal and all we are asking for is fair treatment for all citizens,” Clark said.

On his part, Nnia Nwodo, president-general of Ohanaeze Ndigbo, said restructuring would enhance the unity of the country.

“Our people need unity, equity and justice as citizens; restructuring implies the structural and a physical paradigm of Nigeria to give all sections a sense of belonging.”

Bala Takaya, president of Middle Belt Forum, explained that the alliance between the south and middle belt is for an “inclusive Nigeria”.

“We hereby, invite fellow Nigerians, desirous of equity, fairness and justice in the affairs of our dear country to join us in the task of moving the country forward.

“Our desire and commitment is that our dear country may resume her delayed journey towards the fulfillment of its manifest destiny,” Takaya said.

Also speaking, Seriake Dickson, Bayelsa governor, commended the leaders for their renewed call for the restructuring of the country.

“We gathered here in Bayelsa, the heart of Ijaw Nation today, for a course for an egalitarian and prosperous Nigeria,” Dickson said.