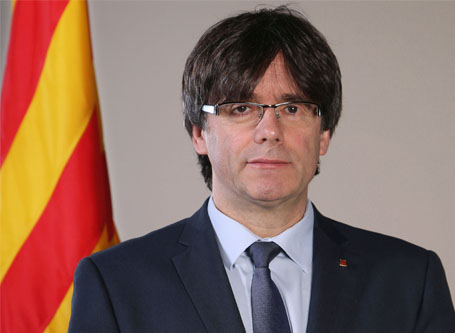 The Spanish state prosecutor’s office has announced charges of rebellion, sedition and misappropriation of funds against the sacked president of Catalonia, Carles Puigdemont, and members of his cabinet.

The leaders of the regional government in Catalonia “have created an institutional crisis that culminated in the unilateral declaration of independence and a complete disregard for our Consitution on October 27,” said Attorney General Jose Manuel Maza on Monday.

The charge of rebellion against Puigdemont and his deputies carries a penalty of up to 30 years in prison.

Catalonia Crowds of protesters swarmed, singing and clapping, through Barcelona’s streets in a sea of red-and-yellow Spanish flags, brandishing placards reading “De Todos” (It belongs to all of us).

Municipal police said the crowd numbered about 300,000 while organisers said 1.3 million turned out and the central government’s representative in Catalonia put the figure at one million.

Spain’s biggest political crisis in decades mounted on Oct. 20 when secessionists in the Catalan parliament voted to declare the wealthy northeastern region of some 7.5 million people an independent republic.