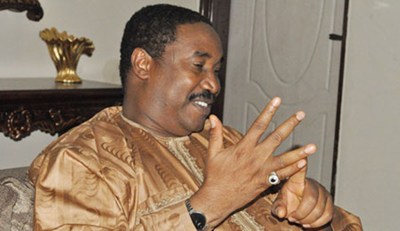 For the second time in two days, the Economic and Financial Crimes Commission, EFCC, again failed to produce witness statements and other documents linking former Governor Ibrahim Shema, to the allegation of N5.7billion SURE-P fund in court as requested by defence Counsel during the resumed trial of the defendant.

At the last adjourned date, the prosecutor, Mr. U.T. Uket, had pleaded with the court for time to enable him produce certain documents he needed to prosecute the matter.

The trial judge, Justice Hadiza Rabiu Shagari, of the Federal High Court in Katsina, had also frowned at the attitude of the prosecutor saying that in a criminal trial, the prosecutor should always be ready to produce documents you served as proof of evidence at anytime.  ”I don’t understand the way you want us to go on in this case, as a prosecutor, delay is not supposed to come from you”, she said.

When the matter came up yesterday, Mr. Uket, who was asked by the court to produce the documents said he was unable to produce it because he could not have access to them when the court adjourned the trial till yesterday two days ago.

He pleaded with the court for more time to enable him produce the documents.

He said, ”We have not been able to have access to the document. We apologise and we promise to make the statement available at the next adjourned date”.

But counsel to Alhaji Shema, Chief Sebastine Hon, told the court that he could not proceed with the cross-examination of the witness without the documents.

According to him, ”We did not only apply for the statement of the witness, we also applied for other documents that will help our case. We will not be able to proceed without those documents”, he said

In a short ruling, the court, again, ordered the prosecution to make available all the documents needed by the defence in the case.

”In view of the prevailing circumstances, I, therefore, order the prosecution to make available all the document needed by the defense to do his case at the next adjourned date”, Justice Shagari said.

Last Tuesday, during the trial, a former Special Adviser to the Governor on Sure P fund who is also EFCC star witness, Nasiru Salisu Ingawa, told the court during the cross examination that he has no proof or evidence that he gave any money from Sure P fund to Shema.

The former Governor Ibrahim Shehu Shema was charged before the court by EFCC on allegations of  misappropriation of the sum of N5.7bn from Sure P, the allegations he pleaded not guilty to.

The EFCC star witness, Nasiru Ingawa at  the  sitting of the court on November 13th, 2018,  in the course of the trial during the evidence  in chief told the court that contracts at Sure P were inflated and some programmes whose money were approved and released were not executed, but he took the money to the defendant.

Also yesterday at the court, the former governor applied to the court for the release of his International Passport.

Prosecution counsel, Mr. Uket did not oppose the application.

In a short ruling, Justice Shagari granted the request of the former governor.

She said, ”The motion praying for the temporary release of the international passport of the defendant to enable him travel abroad for medical treatment from December 14, 2019 to January 14, 2020 is hereby granted. The passport should be returned to the Registrar of the court upon his return”