The management of Skye Bank Plc has written to Acting President Yemi Osinbajo detailing how Tunde Ayeni, chairman of the bank between 2010 and 2016, allegedly used his position to take huge loans from the bank.

But TheCable understands that Ayeni has started repaying the loans — insiders said he paid $10 million to Skye Bank last week and also pays $4.5 million quarterly towards for the facilities he took for the Ibadan and Yola DisCos in line with the restructuring agreement with the consortium of lenders.

Ayeni is also on the verge of securing a $200 million foreign investment, part of which is meant to pay off Ntel’s indebtedness to banks.

TheCable further understands that Ayeni and the management of Skye Bank have lately been holding meetings to resolve the issues raised in the letter to Osinbajo.

In a series of letters and documents seen by TheCable, the management alleged that Ayeni paid for the public companies he bought with loans from the bank. 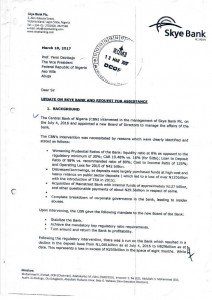 After sending several warnings, the Central Bank of Nigeria (CBN) had taken over Skye Bank on July 4, 2016.

Godwin Emefiele, governor of CBN, said then that the action followed the failure of the lender to meet the regulator’s minimum key liquidity and capital adequacy ratios.

Ayeni had resigned after the development and CBN announced the appointment of Muhammad Ahmad as the new chairman, while Adetokunbo Abiru took over from Timothy Oguntayo as group managing director (GMD).

“Upon the assumption of duty by the new board, one of the immediate concerns that needed to be addressed was to ascertain the true state of the affairs and financial position of the bank and the credibility of the IT and information systems of the bank,” the letter, by Abiru and Ahmad, read. 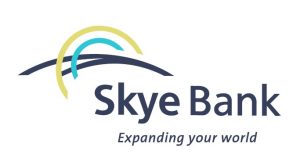 “To this end, the following were undertaken: engagement of PWC do to half-year audit as of June 30, 2016. This was later extended to cover the full year to December 31, 2016.

“Engagement of KPMG to do a forensic audit of the bank’s IT platform and management information systems.

“The forensic audit revealed that the bank operated two sets of financial accountability/books and this was responsive for the regulators/auditors inability to detect the massive losses and infractions, particularly the balance of N280bn in suspense accounts.

“The bank’s total exposure to Ayeni as of the date is about N70bn. It is clear that he used his position as the chairman of the bank to obtain inside loans well above the regulatory thresholds for the acquisition of the following government enterprises: Ibadan Electricity Distribution Company, Yola Ibadan Electricity Distribution Company and Nitel/Mtel. All the facilities are presently seriously challenged.

“As of today, Ayeni’s total industry indebtedness, covering both Nitel and the Electricity Distribution Companies (Discos) is estimated at about N150bn, and little, if any, of these obligations, are being doubtful that he will ever be in a position to service these loans satisfactorily.”

The letter also said another N33 billion was traced to Ayeni, saying there was suspicion that that out of this amount, N7 billion was spent on the re-election campaign of former President Goodluck Jonathan.

The management also indicted Akinsola Akinfewa, Kehinde Durosinmi-Etti and Oguntayo, all former GMDs of the bank.

Other individuals listed in the petition for various acts of infraction are Femi Otedola, chairman Forte Oil Plc, Festus Fadeyi and Jide Omokore.

Ayeni could not be reached for comments as he failed to respond to a text message TheCable sent to his telephone.