UK calls for ‘immediate’ release of Reuters reporters in Myanmar 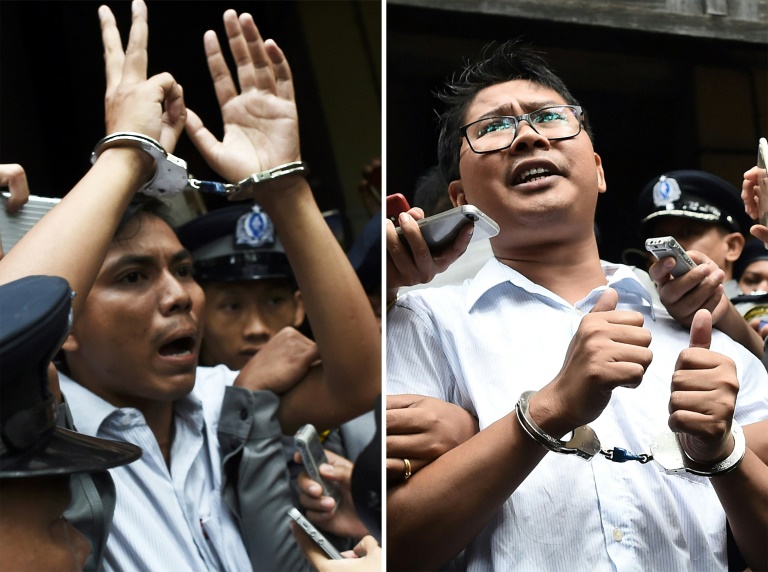 Britain called for the “immediate” release of two Reuters journalists jailed in Myanmar on Monday, saying the verdict had “undermined freedom of the media”.

“We are extremely disappointed with this verdict and sentencing and we call for the journalists to be released immediately,” said a spokesman for Prime Minister Theresa May.

Wa Lone, 32, and Kyaw Soe Oo, 28, are accused of breaching Myanmar’s state secrets law while reporting on a massacre of Rohingya Muslims and were jailed for seven years, fuelling international outrage.

Mark Field, Britain’s Minister for Asia and the Pacific, “said he was “extremely disappointed” by the verdict, calling it a “bad day” for Myanmar.

“They provided valuable reporting on abhorrent human rights violations in Rakhine state, and I have consistently called for their immediate release, including directly with the Burmese government,” he said in a statement.

“Journalists must be free to carry out their jobs without fear or intimidation,” he added.

newsheadline247 - June 29, 2022
Tasks Nigerians, NCoS Personnel On Attitudinal Change The Minister of Interior, Ogbeni Rauf Aregbesola, has called on the judicial arm of government to support the...
News

newsheadline247 - June 28, 2022
A female staff of Sterling Bank Plc, Effurun, Delta State Branch, Favour Fame-Eruagbere, is reportedly on the run after allegedly defrauding customers of the...