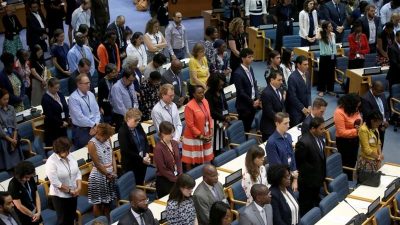 Many of the UN staff killed in Ethiopia Airlines crash were travelling to the UNEP assembly in Kenya’s capital.

An assembly of the United Nations Environment Programme (UNEP) has opened in Kenya’s capital, Nairobi, under a dark cloud cast by the Sunday’s plane crash that killed 157 people, including 22 UN staff, many heading for the annual event.

On Monday, delegates arrived at the event with the UN flag flying at half-mast, and the flags of the UN members that usually adorn the UNEP headquarters having been taken down.

As they wondered aloud who among their colleagues may have been on board the ill-fated Nairobi-bound flight, the delegates hugged and comforted one another, and observed a minute’s silence at the meeting’s start.

According to Maimunah Sharif, the head of UN-Habitat, at least 22 UN employees were among the 157 killed when the Ethiopian Airlines’ Boeing jet crashed early on Sunday, just six minutes after the takeoff from Addis Ababa, the capital of neighbouring Ethiopia.

“I stand before you on the first day of the UN Environment Assembly, which has officially commenced today in the wake of this tragedy,” Sharif told delegates.

“We will not forget this tragedy, nor those who perished. Let us reflect that our colleagues were willing to travel and to work far from their homes and loved ones to make the world a better place to live.”

Nairobi hosts the global headquarters of the UNEP and is the regional seat for many UN agencies.

In a statement before the conference, the UN said it was “deeply saddened” by the news of the Ethiopian Airlines’ plane crash.

“Our thoughts and prayers are with the families of those affected. We are following developments closely,” it said.

A member of the UNEP secretariat told the AFP news agency on Monday it was “still trying to consolidate” the number of staffers killed.

Among the UN staff were some who worked for the World Food Programme, the UN refugee agency (UNHCR) and the International Organization for Migration, the agencies have said.

None of the 157 people on board a new Ethiopian Airlines plane that crashed on Sunday morning en route to Nairobi from Addis Ababa have survived, the airline said.

It crashed near Bishoftu, southeast of the Ethiopian capital, killing all 149 passengers and eight crew members on board, Ethiopian Airlines said in a statement.

It was not immediately clear what caused the crash of the plane, which had been delivered to the airline in November.

According to Ethiopian Airlines’ CEO Tewolde Gebremariam, the pilot, who had been working for the carrier since 2010, sent out a distress call shortly after take-off and was given clearance to return.

Tewolde, who visited the scene of the crash, also said that the “brand-new airplane” had flown 1,200 hours and had arrived from Johannesburg on Sunday morning.

Ethiopian Airlines later published a photo on Twitter showing him standing in the wreckage, lifting what appeared to be a piece of the plane debris at the bottom of a large crater in an empty field.

Little of the aircraft could be seen in the freshly-churned soil.

The CEO “expresses his profound sympathy and condolences to the families and loved ones of passengers and crew who lost their lives in this tragic accident,” the post said.

Ethiopian state media said more than 30 nationalities were on board flight ET 302.

They included 32 Kenyans, 18 Canadians, nine Ethiopians, eight each from China, the United States and Italy; seven each from France and Britain; six from Egypt; four each from India and Slovakia, among others.

Foreign governments said tourists, business people, doctors, and a Kenyan football official were among the dead.

Also on board was at least one staff member of the UN Environment Programme meeting in Nairobi from Monday for an annual assembly of 4,700 heads of state, ministers, business leaders, senior UN officials and civil society representatives. The head of the World Food Programme also wrote on Twitter that agency staff were among those on board.

Ethiopian Airlines said it set up a committee with all stakeholders concerned to conduct forensic investigations and identify the victims.

Al Jazeera’s Catherine Soi, reporting from Nairobi airport, said an “information and service desk has been set up for the relatives looking for information.”

Among them is Edward Gathu, 39, who has been waiting to hear information about his 45-year-old brother, Benson, who was on the flight.

“I feel very weak. I wish they can give me information so that I can accept and move on,” Gathu told Al Jazeera.

“He spoke with his wife last night. Until now we have no information about his whereabouts.”

The Boeing 737-8 MAX is the same type of plane as the Indonesian Lion Air jet that crashed last October, 13 minutes after the take-off from Jakarta, killing all 189 people on board.

The last major accident involving an Ethiopian Airlines passenger plane was a Boeing 737-800 that exploded after taking off from Lebanon in 2010, killing 83 passengers and seven crew members.

Ethiopian Prime Minister Abiy Ahmed’s office tweeted it “would like to express its deepest condolences to the families of those that have lost their loved ones on Ethiopian Airlines Boeing 737 on regular scheduled flight to Nairobi, Kenya this morning.”

Kenya’s President Uhuru Kenyatta offered prayers for the family members and loved ones of those on the flight.

“We are saddened by the news of an Ethiopian Airlines passenger aircraft that is reported to have crashed 6 minutes after takeoff en route to Kenya. My prayers go to all the families and associates of those on board,” Kenyatta said on Twitter.

US aerospace giant Boeing said it was “deeply saddened” by the accident and would provide technical assistance to find out why its aircraft crashed.

“A Boeing technical team is prepared to provide technical assistance at the request and under the direction of the US National Transportation Safety Board.”

Kyle Bailey, an aviation analyst and pilot, said the pilot’s distress call signalled that the plane may have gone down due to a “controllability issue” than an explosion.

“That may lead me to believe that the problem wasn’t imperatively serious,” he told Al Jazeera from New Jersey. “Typically in major disasters when crashes happen, when there are explosions, usually there is no communication from the pilots,” Bailey added.

“The pilots are so focused on that catastrophic event, that they don’t have time to call air traffic control.
The fact that there was a call made to air traffic control, in this instance, makes us believe that it was a controllability issue – that they were struggling for control.”

Speaking to Al Jazeera from Malaga, Spain, aviation analyst Alex Macheras explained that the 737 MAX is the brand new updated version of the Boeing 737.

“The MAX is in service all around the world. Airlines such as the Ethiopian Airlines are using this aircraft, as it is the latest, the most fuel-efficient, short-range Boeing aircraft on the market.

Macheras said new aircraft “do have their hiccups” but that is not to say they are unsafe or more prone to being involved in accidents.

“There are certain advisories for lots of new aircraft and that’s perfectly normal as they enter the market place,” he added.

The Boeing 737 MAX was initiated in response to Airbus’s A320 Neo. Both planes feature modifications to make the aircraft more fuel-efficient.

“It’s a very safe aircraft,” Macheras said, “but of course this accident will send jitters across the industry.”