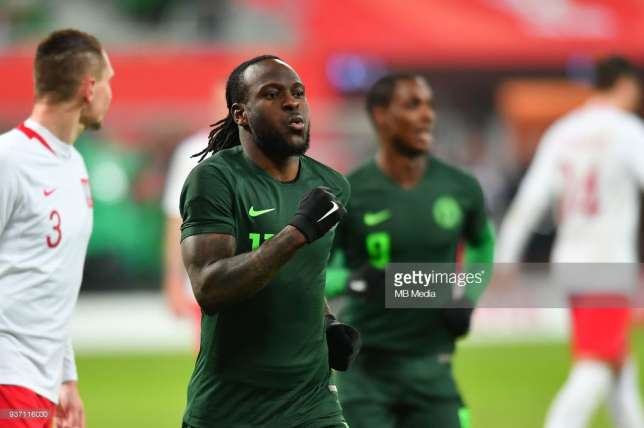 Nigeria on Friday beat Poland in an international friendly match.

The Super Eagles in the encounter demonstrated their intention to impress at the 2018 FIFA World Cup by defeating Poland 1-0 at the Stadion Miejski, Wroclaw.

Victor Moses’ 61st minute penalty kick made the difference as the Eagles fought hard to earn a win over world number eight Poland.

Super Eagles coach Gernot Rohr made the most difficult call between the sticks, as he eventually went for Francis Uzoho.

The selection earned the youngster his first full debut for the Super Eagles and he gave a fairly good account of himself as proceedings went on in the match.

Elsewhere in the Eagles team, Joel Obi was given his first Super Eagles cap since his last outing in a friendly against Scotland in May 2014.

The Torino of Italy midfielder partnered Wilfried Ndidi in the middle of the pack, while Brian Idowu was also chosen ahead of Elderson Echiejile at left-back.

Eight minutes into the game, the Super Eagles were culpable, as hosts Poland almost took the lead after Robert Lewandowski hit the post from a sliding pass.

However, it was a physical contest between the Eagles and the Poles, leading to the removal of Polish Karol Linetty before the Nigerian side tried their bit to threaten their hosts with Moses picking himself up to curl a free kick past Lukasz Fabianski’s post in the 34th minute.

The Eagles had much to worry about between the sticks but Uzoho overcame his jittery start to the encounter and got down well to deny Lewandowski’s point-blank effort in the 51st minute to keep the hosts at bay.

However, it was the Super Eagles who had the upper hand as Moses was fouled in the area and the Chelsea man slotted in his spot-kick perfectly to give Nigeria the lead which eventually took them to the end of the game.

With the morale-boosting win, the Super Eagles will now take on Serbia on Tuesday in London to consolidate their fine form en route the 2018 World Cup in Russia.