HomeNewsVP Osinbajo’s lamentation; Says persecution of Christians on the rise in Nigeria
News

VP Osinbajo’s lamentation; Says persecution of Christians on the rise in Nigeria 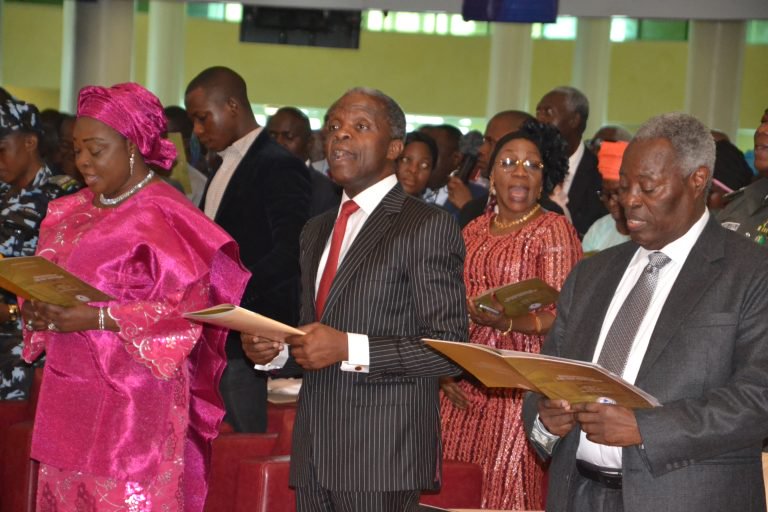 Speaking while inaugurating the over 40,000 capacity new headquarters building and church auditorium of the Deeper Life Bible Church, Gbagada, Lagos, Osinbajo said the federal government is doing everything in its powers to protect the freedom of worship.

He said religious intolerance remains a major challenge against the socio-economic revival of Nigeria, disclosing that President Muhammadu Buhari has given him the mandate to intervene in areas that are facing such challenges with the aim of bringing enduring peaceful co-existence.

He lamented the growing persecution of Christians in many parts of the country, including places where they are being prevented from erecting their places of worship and promised that the government is doing all that are within the law to ensure the rights of all Nigerians are preserved as enshrined in the Constitution of Nigeria.

“Persecution of Christians is on the rise. The devil is hard at work, stoking religious tension. I call on all Christians not to be broken even as security are working hard to prevent such occurrences and protect the lives and property of every citizen,” he said.

“The devil’s biggest agenda is stoke up a religious conflict in Nigeria, one that would make it impossible for anyone to preach the gospel while the security agencies continue to work relentlessly to wipe out the perpetrators of these evil acts.

“And to bring a permanent end to all of the killings going on in the name of herdsmen, Boko Haram or any other name, we as a body of Christ must not lose focus.

“We are called to bring men and women to salvation, even those who kill. The enemy wants us to stand on our pulpits and preach hate but we will obey the Lord Jesus Christ, who said we must love our enemy and pray even for those who persecute us. There is no person born or yet to be born that can stop the gospel of Jesus Christ.”

He called on the church to pray for those in power, saying governance is a spiritual warfare.

“Governance is a spiritual warfare, if anyone does not know that, I know. I ask the church to pray for every one of us in the position of authority in this land.”

On the edifice, Osinbajo said: “This is one of the proudest moments for me as a Christian. This great edifice is for the propagation of the gospel of Jesus Christ.”

The vice president commended William Kumuyi, general superintendent of the Deeper Life Bible Church, for his uncommon humility and commitment to the spread of the “undiluted gospel of Jesus Christ”.

He urged the church to accept that there would be resistance, saying “the devil is even more desperate and grievous as the end draws nearer”.

Addressing the congregation, Kumuyi thanked the vice-president for finding time to witness the official commissioning of the new auditorium, which he described as historical the journey of the church towards evangelizing the world.

Kumuyi, who drew the gathering down memory lane to the modest beginning of the church, said Deeper Life has remained true to the propagation of the message of love embodied in the life of Jesus Christ on earth and promised that the new auditorium will be a pilgrimage centre for spiritual development designed to emancipate the society from the shackles of sin.

He called on members of the church to take advantage of the new auditorium to continue to propagate the gospel, saying that only the eternal truth in the message of Christ has capacity to lift the country from the forcing plaguing its journey to unity and prosperity.