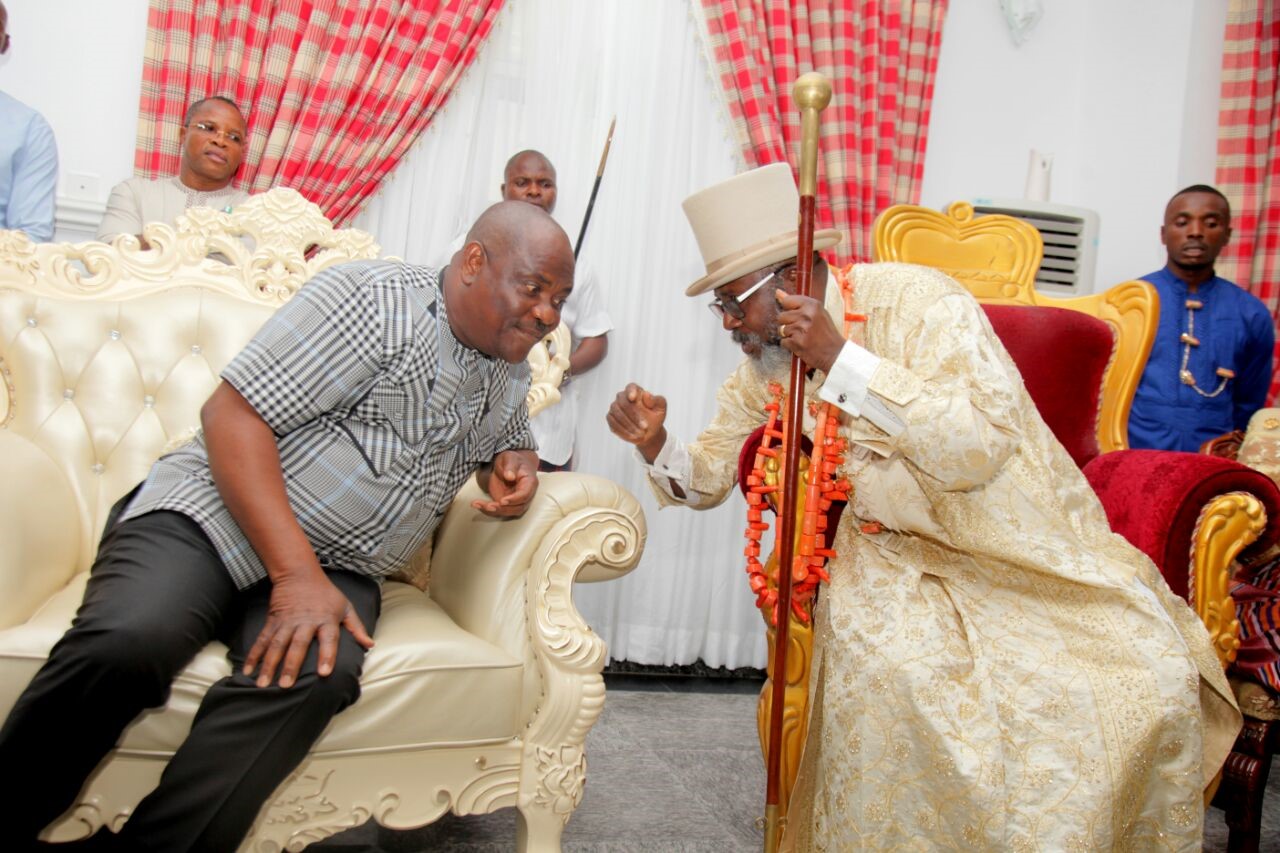 GOVERNOR of Rivers State, Nyesom Wike has declared that the Amayanabo of Abonnema, King Disrael Bob-Manuel remains a duly recognised First Class Traditional Ruler in the state and Amayababo of Abonema.

He declared that nobody has the authority to depose a First Class Traditional Ruler in the state without the approval of the Rivers State Government.

Speaking during a Solidarity visit by the Amayanabo of Abonnema, King Disrael Bob-Manuel and Abonnema Council of Chiefs at the Government House Port Harcourt on Wednesday, Governor Wike regretted that security agency have allowed themselves to be used by some persons to illegally intervene in Chieftaincy Affairs.

“Our security agencies have gone so low that they are now involved in everything, including Chieftaincy Affairs.  Soon, they will involve themselves in husband and wife issues. Can they carry an Emir like that? Can they carry an Oba like that. We pray they withdraw from such illegal activity “.

The Governor charged youths of Abonnema to remain alert in the defence of their traditional heritage, saying no group should be allowed to distort the traditional order.

He decried the situation where prominent elderly people from the area have refused to understand the meaning of peace, hence they have resorted to instigating crisis.

Wike assured that Abonnema Council of Chiefs that he will take up the matter with the State Commissioner of Police and also make a formal report at the Nigerian Army headquarters on the illegal deployment of soldiers to arrest the Amayanabo of Abonnema.

He wondered why the feuding Abonnema United Founding Fathers would spread the false report that some persons were planning to kill Chief OB Lulu-Briggs.

“I don’t know whether they know the implication of the crisis they are generating. There is no need for anyone to create a crisis in a very peaceful community “, he said.

He stated that the entire Abonnema conflict is politically motivated and aimed at achieving pre-meditated political goals.

Governor Wike assured the people of Abonnema that his administration will continue to execute meaningful projects in Akuku-Toru Local Government Area.

“Abonnema people supported us totally. We will do more for the people of Abonnema “, he said.

Earlier, Amayanabo of Abonnema, King Disrael Bob-Manuel said that he has come with Abonnema Council of Chiefs to seek the protection of the governor from persons using the Security Agencies to illegal disrupt the traditional order in the area.

He informed the Rivers State Governor that plans have been concluded to arrest him on trump up allegations, noting that the Inspector General of Police and the Nigerian Army are involved in the scheme.

He added that soldiers invaded Abonnema town with the intent of installing Chief OB Lulu-Briggs as a Regent, but were resisted by youths, women and elders.