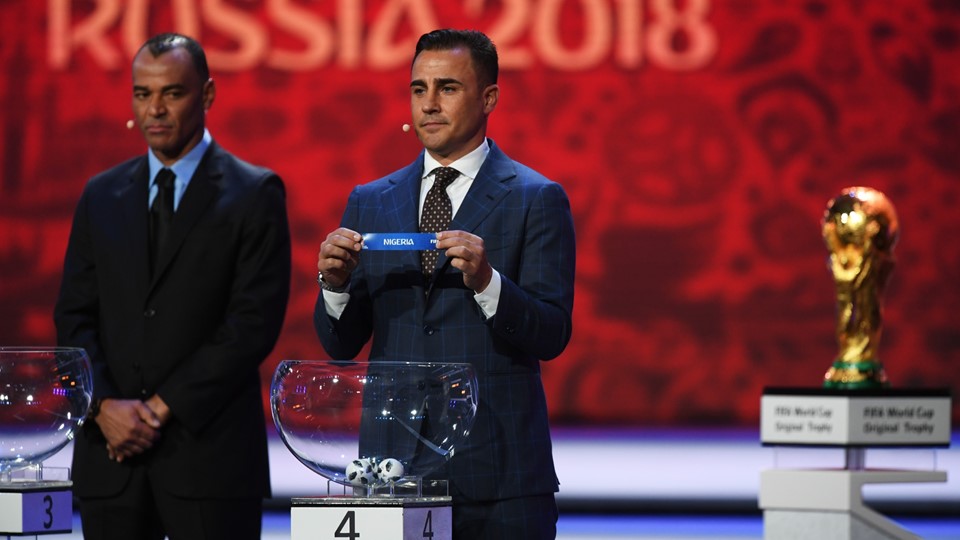 Lionel Messi and his Argentina team which struggled to qualify will play Nigeria for the fifth time, as well as  World Cup debutants Iceland and dangerous Croatia.

The 2010 World Cup winners Spain were placed in the same group as Cristiano Ronaldo’s European champions Portugal, while England will face a talented Belgium side at the 2018 tournament in Russia.

The glitzy draw at the Kremlin on Friday placed Neymar’s Brazil in a group including Switzerland, Costa Rica and Serbia as they seek a sixth title.

Holders Germany meanwhile were paired with Mexico, Sweden and South Korea as Joachim Loew’s men try to become the first nation to retain the title since Brazil in 1962.

In a ceremony overseen by their former striker Gary Lineker, England were placed with Kevin de Bruyne’s Belgium, surprise packages Panama and Tunisia.

England manager Gareth Southgate said his mind went back to playing in the 2-0 group-stage win over Tunisia at the 1998 World Cup.

“Remembering the Tunisia game in 1998, it was the first thing that went through my mind,” he said. “It was a fantastic day and it’s nice to be able to relive that.

“We haven’t done as much preparing on the African teams yet so now that’s what we can focus on.”

The tournament that spans 11 cities and 12 stadiums kicks off when host nation Russia take on Saudi Arabia on June 14 in Moscow’s Luzhniki Stadium.

Russia face a host of dangers in Group A in the shape of Uruguay, led by Barcelona’s Luis Suarez and Paris Saint-Germain’s Edinson Cavani, and Egypt, spearheaded by Liverpool striker Mohamed Salah.

France and their potent strike force of Antoine Griezmann and teenage sensation Kylian Mbappe will play Australia, Peru and Denmark in Group C.

Spain and Portugal’s other opponents in a tough-looking Group B are Morocco and Iran.

Japan has a tough task to finish in the top two of a group including Robert Lewandowski’s Poland, Sadio Mane’s Senegal and Colombia.

Russian President Vladimir Putin said in a speech at the draw ceremony that Russia had a “strong affection” for football.

“Our country is looking forward to the championship and intends to hold it at the highest level,” Putin said.

“I am sure that the forthcoming World Cup will be a huge factor in the development of the sport both in the Russian regions and throughout the whole world.”

In the hours before the draw, FIFA President Gianni Infantino denied that doping was a problem even as Russia are at serious risk of being barred from the 2018 Winter Olympics for doping.

Infantino claimed that the level of testing in football is sufficient to show that the game is largely clean.

“I don’t think there are many other international sports organisations who are doing as many anti-doping tests as football is doing,” Infantino told a press conference.

“If you would have a serious doping issue in football this would be known by now, whether in Russia or any other country of the world.”

Russia have been stripped of a third of the medals they won as hosts of the 2014 Winter Olympics in Sochi.