newsheadline247
HomePolitics2019: Lagos governorship ambition not in my plans - Otedola

2019: Lagos governorship ambition not in my plans – Otedola

Nigerian billionaire oil magnate, Femi Otedola has denied claims that he has set up machinery to actualize an ambition of becoming the next Lagos State governor come 2019.

Mr Otedola, chairman of Forte Oil, made this known in a tweet on his official handle, @realFemiOtedola.

Recall that he was welcomed to Twitter by Africa’s richest man Aliko Dangote, through the latter’s official handle.

There have been reports making the rounds that the oil mogul was preparing to contest for public office.

Some online commentators and social media influencers have specifically claimed the billionaire would run for Lagos governorship seat in the next election.

The talks of his gubernatorial ambition spread wider shortly after a video showing the billionaire sitting amidst Lagosians in an old popular commercial shuttle, ‘molue’ took over the social media space.

It was gathered that the rumours became widespread after a tweet from a parody account on Twitter claimed that the Forte Oil boss will seek to slug it out with Governor Akinwunmi Ambode of Lagos in the coming governorship race.

But Mr Otedola, however, debunked the rumour in a tweet in the early hours of Friday. 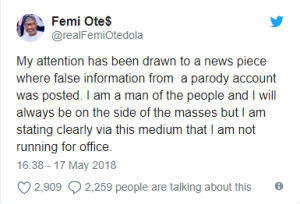 “My attention has been drawn to a news piece where false information from a parody account was posted,” the tweet read.

“I am a man of the people and I will always be on the side of the masses but I am stating clearly via this medium that I am not running for office.”

“The Governor of Lagos State is doing a commendable job and Lagosians should be proud of him,” he tweeted.

Earlier, the business mogul had warned tweeter users to be wary of parody accounts dishing out false information purportedly in his name.

Mr Otedola is the son to a former governor of Lagos State, Michael Otedola.