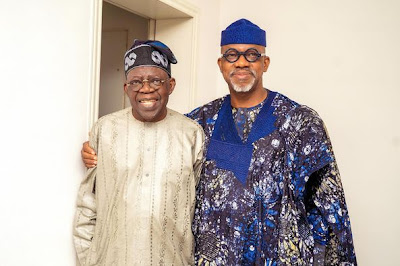 The governor of Ogun State, Prince Dapo Abiodun, has declared that the fortune of Nigeria will change for good if Asiwaju Bola Ahmed Tinubu emerges the president next year.

Abiodun made this declaration in an interview with newsmen after attending a town hall meeting and interactive session with the business community and the organized private sector, organised for Tinubu/Shettima presidential team, held at the Eko Hotel and Suites, Victoria Island, Lagos.

The governor noted that Tinubu and Shettima, having been governors of Lagos and Born States respectively, have the requisite knowledge and experience that could transform the country for good.

He described members of the team selected from every part of the country as highly skilled, knowledgeable and experienced individuals who are ready to hit the ground running for the good of the nation.

“This is an open and transparent display of a team that has capacity, experience and knowledge, and will hit the ground running. It is a typical example of what an inclusive governance will be.

“A government that will not be afraid to take issues head-on and interact with people. I am highly impressed with how our presidential hopeful delivered his blueprint and I am confident that his administration will benefit Nigerians.

“When you look at the calibre of people in the team that cut across the country, you will know that these are the people that understand the pain of Nigerians and the incoming government of Bola Ahmed Tinubu administration will be participatory”. Abiodun stated.

Giving a brief breakdown of his manifesto, the presidential candidate of the All Progressives Congress (APC), Asiwaju Tinubu noted that the business community and the private sector remain the key to economic development and the engine of growth.

He disclosed that his administration would work towards uniting the nation through regular dialogue by opening various channels of communication, where issues affecting Nigerians would be discussed.

On industrialization, Tinubu stressed the need for having a constant power supply to drive the nation’s economy, saying the industrial policies would be revived to encourage production and move the Gross Domestic Product (GDP) to six per cent and the agricultural sector encouraged to produce enough food for the nation.

“I am determined to give you affordable and reliable power that will drive the economy. We cannot produce without constant electricity. We will produce power using gas, sun, wind and water. We must produce and buy made-in-Nigeria products”, he said.

The presidential hopefully added that his administration would recruit more personnel into the security forces and agencies, train, equip, and adequately cater for their welfare as well as monitor, identify and defeat evil groups anywhere in the country as part of efforts to tackle insecurity in the country.

He stressed that Nigeria is at the threshold of prosperity and poverty, the future and the past, adding with unity of purpose, Nigeria shall reach her final destination of development, growth and abundance.

In his opening remarks, the governor of Lagos State, Mr. Babajide Sanwo-Olu, said Lagos prosperity is hinged on the economy blueprint put in place by Tinubu while at the helm in Lagos, saying his wealth of experience as a thoroughbred politician and an astute administrator, would be of great benefit to the country.

The Senator representing Lagos West, Senator Solomon Olamilekan, while urging Nigerians to vote massively for Tinubu and all the APC candidates in the forthcoming elections, said the party flag bearer has the capacity to take Nigeria to the Promised Land owing to his track record as the governor of Lagos State.