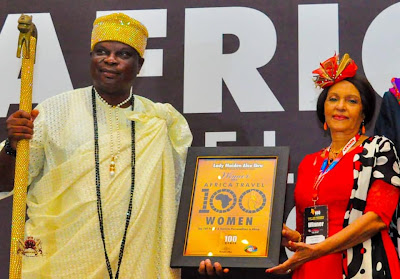 Akwaaba African Travel Market is an annual international travel, tourism, and hospitality event which has become one of the top five travel events in Africa and the leading tourism marketing platform in West Africa.

The Royal Guest of Honour, our most Revered Royal Father, Olofin Apesin Olode, Olota of Otta, Awori Kingdom, His Majesty, Oba Professor Adeyemi Abdukabir Obalanlege, Ph.D, MCIPR, MPRII, FHEA(Lanlege Ekun II, Arole Iganmode) is a keen lover and mover of the tourism sector in Nigeria as he was a former travel journalist with Thisday Newspaper, taught Journalism and Tourism in various institution of learning before getting to the peak as Professor of Journalism.

His Majesty applauded the hardworking team behind the world-class event especially the head of the Akwaaba team, Ikechi Uko for his efforts and achievements in the tourism industry over the years. He prays for all the partakers including the exhibitors for more success in their endeavours as they further brainstorm on ‘Can Lagos Become A Global Travel Destination?’, and making it a reality.

The women across Africa who were awarded as top 100 Travel & Tourism Personalities in Africa include; The Minister for Tourism and Cultural Affairs Sierra Leone, Dr. Memunatu B. Pratt, Senator Florence Ita-Giwa, Lagos State Commissioner for Tourism, Arts and Culture, Mrs Uzamat Akinbile-Yusuf among others.