newsheadline247
Home Society People All of us you married will give you peace of mind’ –...
Advertisement 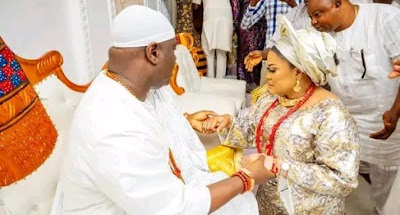 “You would not weep over anyone. You will not know sorrows. Ile Ife will enjoy the goodness. All of us you married will give you peace of mind”

When the Ooni Of Ife, Enitan Ogunwusi, marked his 48th birthday over the weekend, his first wife, Miriam Ogunwusi, prayed for peace upon him and his other wives.

Ms Mariam, whom he married in September, nine months after Silekunola Naomi, his ex-wife, confirmed the end of their three-year marriage, acknowledged his other wives while praying for peace in their household.

In a celebration to mark his birthday on Sunday in Ife, the queen also prayed for long life, good health and peace to all his recently married wives.

During a prayer session, she said: “You would not weep over anyone. You will not know sorrows. Ile Ife will enjoy the goodness. All of us you married will give you peace of mind.”

In a clip on social media, the queen can be seen on her knees in front of a celebratory cake, praying for the Ooni while others responded to her prayers.

The Ooni, in the company of his first wife, held a thanksgiving service on Sunday following their wedding last month.

It was held at the Ooni’s Palace. Queen Mariam, from Ebira ethnic group in Kogi State, was traditionally married to the Ooni on 6 September.

Before marrying the first-class king, she worked at Nestoil Limited, an engineering, procurement, construction and commissioning company in the oil and gas sector.

She lost her father at a young age and was reportedly brought up in the home of a former inspector general of police Mohammed Abubakar. Her mother is a retired police officer.

Ooni and Queen Mariam attended the annual Olojo Festival in Ile-Ife, Osun State, in September. It was their first official public outing since their celebrated union.

The new Olori was dressed in an all-white ensemble like her husband and was seen speaking with the royal father as different groups paid homage to the Ooni during the ceremony.