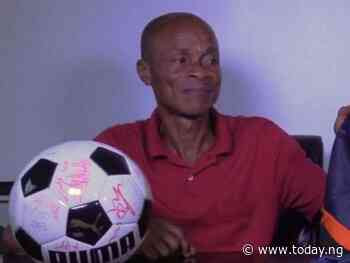 Sofoluwe, who represented Nigeria between 1983 and 1988, played 40 games for the Green Eagles

The untimely demise of one of the best players to have ever represented Nigeria, Yisa Sofoluwe, in the late hours of Tuesday, 9th February 2021 has thrown the Nigerian sports fraternity into confusion and disbelief.

Sofoluwe, a rock-solid defender during his playing days at both club and national teams, the light-skinned player was known for his resilience, hard work and commitment to duty.

In his reaction to the sad news, the President of All Stars Football Club of Abeokuta, Alhaji Abdulwaheed Lawal, expressed shock over the development, describing the late Green Eagles defender as a well cultured and dependable individual who gave his all at all times.

Alhaji Abdulwaheed Lawal seized the opportunity to call on stakeholders in the sports sector to rally round those retired sportsmen and women and support them. He, however, advocated the establishment of a sports foundation that will be used as a basis of caring for the interest of ex-international, especially in their old age.

Sofoluwe, who represented Nigeria between 1983 and 1988, played 40 games for the Green Eagles and scored one goal.

He won silver medals at the 1984 and 1988 African Cup of Nations tournaments losing to Cameroon in both championships staged in the Ivory Coast and Morocco.