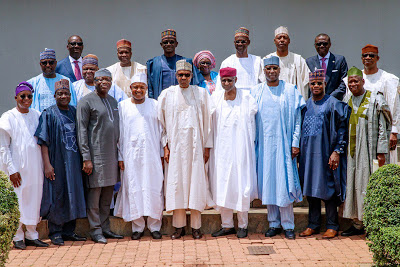 The Progressive Governors Forum says community policing initiated by some state governments will complement the efforts of the federal government in tackling insecurity in the country.

The Governor of Plateau, Simon Lalong, said this on Friday while briefing newsmen at the end of the first quarterly meeting of the forum’s Governance Programme Steering Committee Meeting in Abuja.

Lalong said the forum believes in community policing that operates within the ambit of the law.

The Plateau State governor, who is the co-chair of the committee, said the committee was preparing a framework to enhance good governance and address insecurity in the All Progressives Congress (APC) controlled States.

“Here, we are not talking about Amotekun, we are talking about general insecurity, and once we lay the foundation for the APC states and it is approved, then we will begin to talk about implementation.

“What we are laying down now in the framework is general on insecurity, because we are not unmindful of the situation in the country.

“In general term, what we did after presentations from security agencies is, all of us appear to be talking about community policing. That one we are all agreed on.

“So, we don’t want a situation where you start doing something and the federal government will say you are doing it outside the law just like what they said about Amotekun.”

He said that the committee’s mandate was to design policies for implementation for good governance in APC states.

“As we pointed out during the inaugural meeting of this Steering Committee, from 2019-2023, we will want the work of the PGF Governance Programme Steering Committee to focus more on strengthening the capacity of our states to have increased commitment to implement approved initiatives.”

Governor Lalong condemned the killing of students and religious leaders by the Boko Haram, urging Nigerians to be united in fighting insurgency.

Also, Co-Chairman of the committee and Governor of Jigawa, Abubakar Badaru, said that the progressive governors believed that each state knew what would work for it in protecting lives and property, depending on its peculiarity.

“On Operation Amotekun, I believe the Federal Government and the South West region can find some solutions. They are engaging in dialogue and I believe they will resolve it.

“I believe security situation is peculiar to each state, it depends on each state what they think will work for them. Some will want Amotekun, some dialogue, some may not need any.”

Badaru said that the APC adminstration was working had to tackle insecurity and corruption in the country.

“Above all the government is looking at social security to see how we can address insecurity and unemployment.”