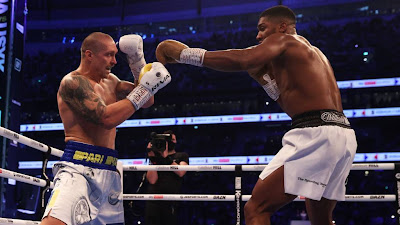 The match followed last year’s first round in London in which Usyk beat the British boxer. Although Joshua improved over last year’s bout, he fell short to a more agile and resilient opponent.

After initially storming out of the stage, Joshua later came back to give an impassioned speech where he acknowledged Usyk as the global champion of heavyweight boxing.

“If you knew my story, you would understand the passion. I ain’t no amateur boxer from five-year-old that was an elite prospect from youth.

“I was going to jail, I got bail and I started training my a*** off, I wanted to be able to fight.

“This guy beat me tonight, maybe I could have done better, but it shows the level of hard work I put in, so please give him a round of applause as our heavyweight champion of the world,” Joshua said.

Usyk was on the frontline for several months following Russia’s invasion of Ukraine in February. He later travelled to prepare for today’s rematch with Joshua.

The Ukrainian flag went up on stage and was held for several minutes between him and Joshua as a solidarity towards the war-torn country fighting Russia’s aggression, which has been condemned and drew sanctions across the world.