HomeAFPBritain's May seeks to save Brexit after pledge to quit
Foreign

Britain’s May seeks to save Brexit after pledge to quit 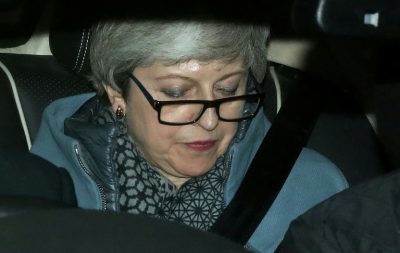 British Prime Minister Theresa May sought Thursday to salvage her unpopular EU divorce deal after another day of political drama that saw her offer to resign and the fractured parliament fail to find a way out of the Brexit chaos.

Mounting tensions and frustrations over Britain’s inability to leave the EU three years after a divisive referendum culminated Wednesday in May’s decision to play her trump card and promise to stand down as premier if her plan is passed.

EU leaders last week offered Britain a Brexit extension until May 22, but only on condition that parliament votes through the deal by Friday, the day Britain was originally scheduled to leave the European Union.

If the parliamentary vote does not take place, May will have to spell out to EU leaders what steps Britain will take by a deadline of April 12, or risk crashing out of the bloc without any arrangements in place.

May’s resignation pledge played on rivalries that have been driving much of the resistance to her vision for ending the 46-year EU partnership from the fiercely eurosceptic wing of her Conservative party.

“I know there is a desire for a new approach — and new leadership — in the second phase of the Brexit negotiations and I won’t stand in the way of that,” May told a packed meeting of party members Wednesday.

Her promise immediately turned the votes of some likely contenders for the job she took on shortly after the referendum in which Britons narrowly voted to leave the EU.

May’s handling of Brexit has provoked anger and frustration both at home and abroad and even ridicule in some quarters.

But former foreign minister Boris Johnson said he would now back the premier “on behalf of the 17.4 million people who voted for Brexit”.

“I feel very, very sorry and though it fills me with pain, I’m going to have to support this thing,” he told The Daily Telegraph newspaper.

But any momentum the prime minister may have gained was punctured by a decision by her crucial allies in Northern Ireland’s Democratic Unionist Party (DUP) to continue fighting the deal.

The hardline group props up May’s minority government and plays an outsized role in the political saga that has consumed Britain and left its EU partners increasingly perplexed.

“We will not be supporting the government if they table a fresh meaningful vote,” the DUP said in a statement.

The DUP is opposed to provisions in May’s deal to keep a free-flowing border between Northern Ireland and the Republic of Ireland, an EU member state.

They worry that this would give Northern Ireland a different economic status from mainland Britain, one of the key sticking points in May’s deal.

The DUP’s announcement means the odds are still heavily stacked again May’s ability to overcome two thumping defeats and get her Brexit deal through parliament on a third attempt.

“Will her sacrifice be in vain?” the Daily Mail asked on its front page.

The pound was down against both the dollar and the euro on Thursday over the continued Brexit uncertainty.

The sense of Britain being back at square one was only reaffirmed by parliament’s inability to rally round any new last-minute Brexit proposal.

Parliament took the unprecedented step of assigning itself the right to vote on a multiple choice of alternate solutions to the deal May reached with Brussels after 17 months of talks.

But none of the eight options secured a majority and another vote has been set for Monday on some of the proposals.

The one that came closest to winning parliamentary support provided for a much closer economic union with the other 27 nations post-Brexit than the one the Conservative party platform allows.

A proposal to hold a second referendum — a popular idea with EU supporters — came second while those promoting a cleaner break finished near the bottom.

The results help support May’s message that her deal — despite its flaws — is still the only one that can safely guide Britain out of the EU.

But it remains unclear when she hopes to test her luck in parliament for a third time.