Coronavirus: 58 quarantined in Nigeria over contacts 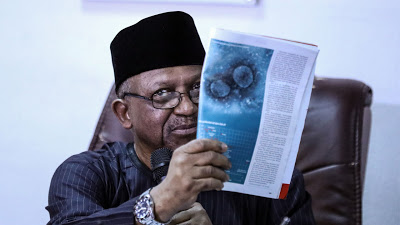 Nigeria is monitoring 58 people who had contact with an Italian man infected with the new coronavirus, the health minister said Monday, as officials scrambled to stop the disease spreading.

Africa’s most populous country on Friday confirmed the first case of the virus in sub-Saharan Africa after the patient was diagnosed in the economic hub Lagos.

The Italian had arrived from Milan on a business trip a week ago and travelled to a company in neighbouring Ogun state before being diagnosed.

He was quarantined at the Infectious Disease Hospital in the sprawling city of 20 million and was responding to treatment.

“Currently, the contacts of the index case are identified as 19 contacts in Lagos and 39 contacts in Ogun state,” Health Minister Osagie Ehanire told reporters in Abuja, the nation’s capital.

“We are in touch with these contacts who are under supervised self-isolation and the states have provided them with temperature monitoring tools,” he said, adding that they would be under observation for at least 14 days.

The minister said the measure was to control the spread of the disease, which has killed more than 3,000 people, mostly in China where it broke out late last year.

“Contact tracing is a specialised activity that is done by experts — epidemiologists who know exactly what questions to ask and how to track people down.

“And the purpose is to know if you have an index case, who has been in contact with, and what is the likelihood that that person contracted the disease,” he said.

Ehanire said health officials would continue to hunt for more contacts with the Italian, adding that the 156 passengers on the same flight with him when he came to Nigeria were also being traced.

“We cannot give you a specific figure because it is a continuing process,” he added.

Nigeria is viewed as highly vulnerable to viral spread given its weak health system and high population density.

Prior to the case in Nigeria, the first in sub-Saharan Africa, there had been just two cases on the continent — in Egypt and Algeria.