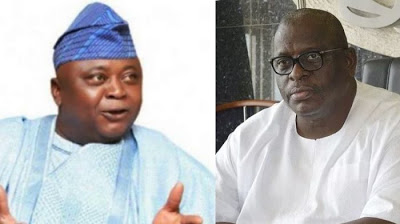 The Ogun State chapter of the Peoples Democratic Party (PDP) is currently engulfed in yet another crisis as the two major stakeholders in the state, Ladi Adebutu, a former member of the house of representatives and Senator Buruji Kashamu are in for another round of battle.

The supremacy battle this time is on who controls the state party executive committee as the crisis seems out of hands.

Sen. Kashamu, the party’s governorship candidate and Adebutu, also a Guber aspirant under the same party in the last election have been in a fierce battle over who controls the PDP in Ogun State.

Both gladiators are from Ogun East Senatorial district.

The recent happenstance seems more like a game of chess as Adebutu’s move to rake all key members of the executive committee under the nose of Buruji may have left the former senator’s camp empty.

Newsheadline247 gathered that Ladi Adebutu, son of billionaire lotto merchant, Kessington, had immediately after the last election in 2019 invited all stakeholders of the party across the state to a peace and harmonization meeting.

Most of the invited stakeholders were Kashamu core loyalists.

At the said meeting, Adebutu expressed his intention by telling stakeholders present at the meeting that all he wanted is a strong, formidable and united PDP in the state. He assured them of his commitment to bring all members together and rekindle the party’s strength again only if they cooperate and work with him on the same line.

After the meeting, Ladi promised to take all these stakeholders to a meeting in with the party’s presidential candidate in the 2019 election, Alhaji Atiku Abubakar in Dubai, United Arab Emirate and also another meeting with the National Chairman of the Party, Uche Secondus in Abuja.

“All those who attended that meeting were given five hundred thousand naira (N500,000) each to fuel their cars with a promise of one million naira each if they cooperate with Ladi,” a privy source told newsheadline247.

Having taken a large bloc of the executive committee, the party is almost in Adebutu’s pocket as all of those who attended the decisive meeting pledged their support and loyalty to the billionaire politician.

“They all promised to work with Ladi in achieving his aim and as well support his governorship ambition in the next election,” the source said.

Already firmly in his grip is the National Working Committee of the party – The NWC of the PDP had taken side with Adebutu when the crisis started in the build-up to the 2019 election. But Kashamu ran to court to seek protection in order to retain his Bayo Dayo-led executive as the one in charge of the party in Ogun – The court granted his prayers and he, consequently, became the party’s flag bearer in the governorship election.

It was however too late for Kashamu as his rare guard has been emptied long before the Abuja “peace meeting.”

The Secretary of the party in Ogun, Semiu Sodipo, had on Wednesday last week, led other executives from Kashamu’s faction to a meeting, with Secondus, where they announced their merger with Adebutu and his camp for a united and peaceful PDP in the state.

The Kashamu camp was in shock when the news flew in that most members of its controlled ex-co were in Abuja, dining and wining at a peace meeting with Secondus and Adebutu.

Read Also Ondo: No one can stop me from making my son Chief of Staff – Akeredolu

Dazed by the turn out of the event, the Ogun State Chairman of the party, Bayo Dayo in a quick reaction debunked the claim that the Kashamu faction is joining forces with Adebutu.

Dayo is one of the few loyalists and executive members still with Sen. Kashamu.

In his reaction to the Abuja peace meeting and “merger”, Dayo announced that the suspension of the Secretary, Sodipo, adding that he was not representing the interest of the Kashamu group. He also described Secondus as someone who was after money and not seeking peace in the PDP.

Sodipo fired back at Dayo by similarly announcing his suspension for alleged anti-party activities. He described his (Sodipo’s) alleged suspension as unfounded.

Sodipo, on Sunday, disclosed that 10 out of the 14-member Central Working Committee of the Bayo Dayo-led executive have united with the Adebutu camp.

Newsheadline247 understands that the Kashamu faction has vowed to go ahead with the state congress at their own date while the Adebutu faction, now comprises the Secretary and nine other executives, said it awaits the National Secretariat for further directives on the congress.

The battle continues as raging factions spit fire ahead of the party’s congress set to elect party new executive officers all levels in the state.