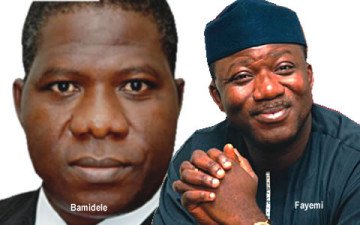 A governorship aspirant in Ekiti State, Hon. Opeyemi Bamidele and one other person have been shot, The Guardian NG reports

According to the report, the victims were shot at the All Progressives Congress secretariat in Ajilosun, Ado-Ekiti, during a reception organised for the governorship candidate of the party, Dr Kayode Fayemi.

Media reports say a former of Ekiti State and the candidate of the All Progressives Congress in the coming state governorship poll Kayode Fayemi was the real target.

It was gathered that the bullet came from the rifle of a mobile policeman who was among those deployed to provide security.

Bamidele and another APC leader in Ekiti have been rushed to an unknown hospital for treatment.