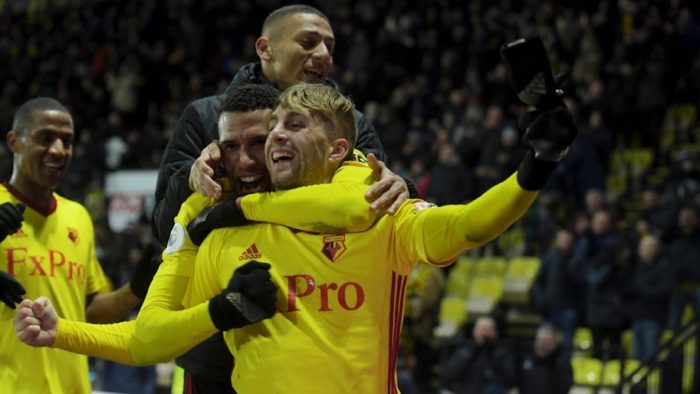 Eden Hazard’s fine finish appeared to have saved a point for the Premier League champions, who were again awful after a 3-0 home thumping at the hands of Bournemouth last time out.

However, it only served the sting the Hornets into a late flurry, which handed Javi Gracia a massive win on his home bow as Watford boss.

Tiemoue Bakayoko was booked twice inside five first-half minutes, although the Blues were already in the midst of a sloppy performance, in which they failed to test Watford’s back line sufficiently.

And Watford led before half-time when Troy Deeney slammed home a penalty after Thibaut Courtois felled Deulofeu, although the Watford captain could face trouble after celebrating by brandishing his middle finger.

Hazard’s impact seemed to have salvaged a draw, but with Chelsea with open at the back, Janmaat restored Watford’s lead and Deulofeu, on his home debut, curled home before substitute Pereyra lashed in Watford’s fourth to complete a famous win.

Conte spoke pre-match of desiring a statement of support from the Chelsea board, but after three defeats in four games in all competitions his time at Stamford Bridge could be coming to an end, with Tottenham now just a point behind the fourth-placed Blues.