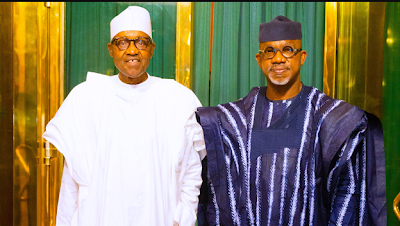 In recognition of his efforts to enhance rapid industrialisation, enhance the ease of doing business and make the state Nigeria’s top investment destination, the Ogun State governor, Prince Dapo Abiodun will, on Friday, October 21, be decorated by President Muhammadu Buhari with the Distinguished Award for Industrial Revolution.

This was made known in a letter dated September 21, 2022 and addressed to the governor by the Permanent Secretary (General Services) in the Office of the Secretary to the Government of the Federation, Dr. Nmadi Mbaeri.

The awards, which will be held at the State House Conference Centre Abuja,  are being organised by The Best Strategic Media (TBS) in collaboration with the Office of the SGF, Mr Boss Mustapha.

The latest award, coming on the heels of the confirmation by the National Bureau of Statistics (NBS) that Ogun State, with N100.9bn revenue profile in 2021, is one of the states with the highest internally generated revenue nationwide, coming only after Lagos, the FCT and Rivers State, is expected to further spur the Ogun governor to achieve greater excellence in governance.

According to industry watchers, the governor has, in the last three and a half years, been credited with superlative performances in the area of investments in agriculture,  road infrastructure,  ICT,  urban renewal, the building of an Agro-allied Airport, and security of life and property.