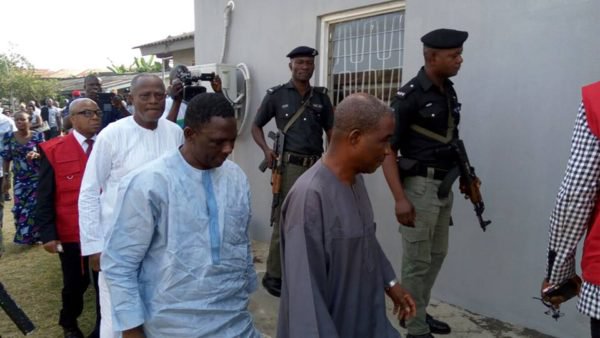 The former Director-General of the Institute of Agricultural, Research and Training, Prof Benjamen Ogunmodede and two others were sentenced to 40 years in prison without an option of fine by a Federal High Court sitting in Ibadan Tuesday.

Prof Benjamen Ogunmodede has said that he and two other persons convicted alongside him spent N177m to bribe lawmakers and some employees of the Federal Ministry of Finance.

The other two convicted persons were the institution’s account staff members, Zacheus Tejumola and Adenekan Clement.

According to Punch, the three individuals were arraigned by the Economic and Financial Crimes Commission in 2011 on 16-count bordering on conspiracy, unlawful conversion, stealing of school subvention among others.

While giving the judgment, Justice Ayo Emmanuel said each of the convicted persons would spend four years for each of the charges they were guilty of, adding, however, that they would spend the jail term concurrently.

Ogunmodede and others were accused of diverting N177m out of a subvention of N600m released by the Federal Government for the school.

The sum (N177m) was said to have been spent without due process.

In their defence, the convicted persons claimed that a huge part of the money was used to bribe members of House of Representatives and some staff of the Federal Ministry of Finance who facilitated the release of the fund for the research institute.

But Justice Emmanuel ruled that Ogunmodede and others were clearly guilty of the charges preferred against them.

He said that bribery and money laundering were illegal activities that had been prohibited in the country and that they were punishable under the law.

The judge said the sentence would serve as deterrence to people in public position who might wish to mismanage public fund.

“We must have it in our mind that the primary reason for sentencing a guilty person is to serve as a deterrence to those with similar criminal tendencies and for rehabilitation of the accused.

“The two reasons are sociological in nature,” he said.

Ogunmodede’s counsel, Tunde Olupona, from the chambers of Rotimi Akeredolu, said the legal team would review the ruling and decide on the next step.

EFCC’s lead counsel, Nkereuwem Anana, said the judgment was an indication that the war against corruption was being won in the country, noting that the judgment would send a message to others who are mismanaging or embezzling public funds that the long arm of the law would one day catch up with them. Punch