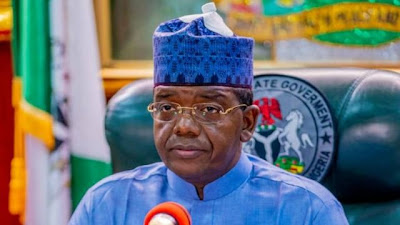 Governor Bello Matawalle of Zamfara, on Friday, urged the 2022 intending pilgrims to fervently pray for peace to return to the state and Nigeria in general.

The governor stated this in Gusau while bidding the 1,303 intending pilgrims to Saudi Arabia farewell.

Matawalle said that Zamfara, in particular, needed prayers over the security challenges currently being witnessed in the state.

He also urged them to be good ambassadors of the state and respect constituted authorities of both Nigeria and their host country, Saudi Arabia.

He stated that his administration had provided all the necessary logistics and other support needed for the successful transportation of the intending pilgrims to the holy land and a hitch-free Hajj exercise.

“The state government has provided brand new vehicles for the transportation of the intending pilgrims, right from Gusau, the state capital, to Sultan Abubakar International Airport, Sokoto, for their onward journey to Saudi Arabia.

“This is in addition to the provision of befitting accommodation in Madina, Mecca, Minna and Arafat as well as other welfare packages for the comfort of the pilgrims,” Mr Matawalle said.

He added that his administration had sponsored Islamic scholars, medical personnel and other officials who would guide the intending pilgrims on the tenets of Hajj exercise while at home and in the holy land.

The governor urged the state government delegation and officials of the State Hajj Commission to intensify efforts at ensuring successful Hajj operation.

Meanwhile, wife of the governor, Aisha Bello- Matawalle, has enjoined the intending pilgrims to be law- abiding while in the holy land.

She particularly urged the women pilgrims to be extra careful with their basic travel allowance (BTA) and offer special prayers for the state.

Earlier, Nasiru Magarya, Leader of the state government delegation and Speaker of Zamfara House of Assembly, informed the governor that his committee had concluded arrangements for a smooth transportation of the intending pilgrims.

Magarya said that a total of 1,303 people would perform this year’s Hajj from the state.

He commended the governor for his support to the committee.

Others, who are from Talata Mafara, Tsafe, Shinkafi and Maru council areas, will be transported in the early hours of Saturday.