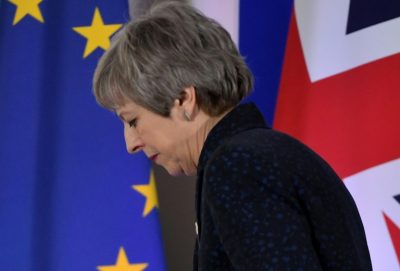 Prime Minister Theresa May returns to Britain on Friday vowing to make “every effort” to win over MPs opposed to her EU divorce deal, hours after securing a delay to Brexit from European leaders in Brussels.

The embattled premier faces daunting odds to persuade recalcitrant British lawmakers to back a plan they have already overwhelmingly rejected twice by a new April 12 deadline agreed with the European Union.

If May succeeds, Britain — which was staring at a sharp cliff-edge deadline of March 29 for leaving the EU — will depart on May 22 under the terms of a withdrawal agreement struck with the EU last year.

But if MPs defeat the accord again next week Brexit will go ahead on April 12, unless London decides to request another longer extension which would require Britain taking part in elections for the European Parliament in May.

“We are now at the moment of decision,” May told reporters in Brussels late Thursday.

“I will make every effort to ensure that we are able to leave with a deal and move our country forward.”

MPs resumed the debate over Brexit on Friday after the speaker granted an urgent question on the issue.

Parliament has been deadlocked for months over Brexit, with lawmakers unable to decide how to implement the 2016 referendum result, reflecting bitter divisions in the country as a whole.

The pound rose Friday on news of the delay but was struggling to claw back its latest losses with uncertainty remaining high over what path Britain will now take.

“The UK government will still have a choice of a deal, no-deal, a long extension or revoking Article 50,” he told a press conference.

Tusk said April 12 had emerged as the “key date” — the date by which Britain has to register candidates for the European Parliament elections.

“If it has not decided to do so by then, the option of a long extension will automatically become impossible.

“Until that date, all options will remain open.”

After discussions with May, the EU’s 27 other leaders wrangled late into the evening in Brussels over the terms of delay, with reports emerging they were unconvinced by her strategy.

French President Emmanuel Macron said that prior to the summit he believed May’s deal had a 10 percent chance of winning parliamentary approval, but after hearing from her, that had dropped to five percent, according to a European source.

“You are very optimistic,” Tusk is said to have replied.

The date for a third parliamentary vote on the divorce deal has not yet been set.

And it faces a further hurdle in the form of speaker John Bercow, who has said the agreement has to be on different terms from the ones MPs have already resoundingly rejected.

In the wake of the summit, lawmakers in Britain signalled their continuing unease at the pact.

“Extension negotiations are a sign of things to come under May’s deal,” said Conservative MP Sam Gyimah, who quit the government in December in protest at the plan.

“Out of the room, each one of 27 countries will have a veto over what we want. This is not taking back control,” he added on Twitter, calling for “time… to work out where we (are) going.”

Ardent Brexiteers decried the delay and indicated that they remain implacably opposed to May’s deal.

“I think there’s going to be a strong sense amongst many millions of people that this is a total failure of leadership.”

He vowed to lead his newly-formed Brexit Party into the European elections with a roster of candidates if a longer extension is agreed.

Conservative MP Peter Bone told the BBC: “If a deal is a bad deal, it’s a bad deal, and I’m not going to vote for it.”

Conservative-leaning newspapers also reported growing opposition to May remaining in power amid her crisis-hit handling of Brexit.

The Daily Telegraph said Graham Brady, the most senior Conservative MP outside the government, visited Downing Street on Monday to deliver the message.

The prime minister has also increasingly lost the support of her chief whip Julian Smith, who was reportedly furious at her statements Wednesday castigating MPs he is trying to win over to her deal.

As uncertainty continues to reign, almost three million people have signed an online petition calling on the government to cancel Brexit.

And a poll published on Friday found that around four in 10 adults in Britain have been left feeling powerless, angry or worried by Brexit over the last year.

France’s first lady, Brigitte Macron plans to sue website over claims that she is transgender