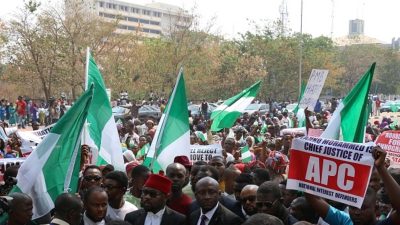 The order by Nigerian Bar Association (NBA) for lawyers to boycott courts nationwide from Tuesday, Jan. 29, was partially complied with at the Federal High Court, Abuja.

The News Agency of Nigeria (NAN), reports that the NBA ordered its members nationwide to boycott the courts for two days to protest the suspension of Chief Justice of Nigeria, Justice Walter Onnoghen by President Muhammadu Buhari.

Court 3 at the Federal High Court sat and was filled with lawyers.

NAN, however, reports that when some cases were called, there were no legal representations and no reason given for the absence of counsel.

One of the lawyers, Hadiza Sani, who spoke to NAN said that she was not aware of the order to boycott courts.

Another lawyer who spoke on condition of anonymity, said that boycotting the courts, particularly on Jan. 29 would not be fair to his client, who had been in detention and had the opportunity to have his bail application heard.

Mr F.A. Aba, also a lawyer, told NAN that he was in court only to take fresh dates for his cases and to tell his clients that the case had been adjourned.

Aba who said he was part of the lawyers who supported the boycott, noted that in every organisation, there were fifth columnist, who would want to oppose every decision.

“There are definitely some lawyers who will not want to comply with the NBA directive, but I know that the association will take the necessary action against the lawyers who did not comply.’’

According to the lawyer, there should have been a task force set up to enforce and ensure compliance.

”I am really surprised to see that some courts are sitting and lawyers are in court.

”For those of us who have pledged our allegiance to NBA, even though we have matters, we have decided to take fresh dates.”

Some other lawyers, who also spoke on condition of anonymity, said that the NBA was not paying their bills so they had to come to court to “hustle.”

A NAN correspondent, who visited the FCT High Court, Jabi, reports that some judges reported for duties and entertained cases.

Among the judges that sat were: Justices Mairo Nasir,  Danlami Senchi, Adebukola Banjoko and Hassan Babangida.