No court can stop us from arresting IGP Idris; Senate boasts 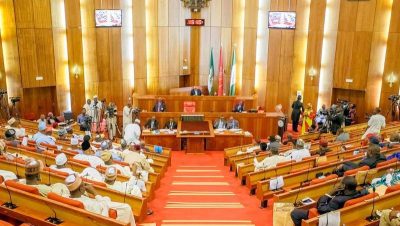 The Senate has threatened to issue arrest warrant against the Inspector-General of Police (IGP), Mr Ibrahim Idris, for failing to appear before its ad-hoc committee investigating allegations of abuse of office against him.

The Chairman of the ad-hoc committee, Sen. Francis Alimikhena, issued the threat when the IGP failed to appear before the committee on Wednesday.

Alimikhena, who is also the Deputy Chief Whip of the Senate, said the IGP was summoned on Oct. 16 to answer allegations made against him by Sen. Isah Misau (APC-Bauchi).

Alimikhena said rather than honour the invitation, his lawyer, Alex Iziyon, wrote to the committee informing it that the matter was already in court.

He said” nobody, including court, can stop the Senate from carrying out its constitutional duties.

“The separation of powers guaranteed by law, made it explicit that the Senate cannot be prevented in carrying out its constitutional duties by any other arm of government.

“If the IGP fails to appear on Nov. 7, the committee would invoke Section 89 of the Constitution of the Federal Republic of Nigeria to compel him to appear.

“He will be summoned again and must appear next Tuesday, 7th of November.

“We got a letter from his lawyer, Alex Iziyon that he will not appear before this committee. He said the IGP has already gone to court and appearing will be subjudice.”

He said there was no way the IGP’s appearance before the committee would amount to contempt as committee was set up before he went to court.

“There are issues about virement in the 2017 budget which Misau also raised. We need him to respond to these allegations.

“We will invite him again and he will appear before us. If he fails to appear, we will invoke Section 89 of the 1999 constitution, as amended.”

Sen. Misau had while testifying before the probe panel, claimed that the IGP purchased two jeeps for the wife of the President, Mrs. Aisha Buhari.

He also alleged that the IGP misused over N120 billion generated by the Force in one year.

Misau equally alleged that the police boss got a serving police officer pregnant and hurriedly arranged a marriage ceremony in Kaduna.

However, the Police boss, through the Force Spokesman, Jimoh Moshood, dismissed the claims as unfounded.