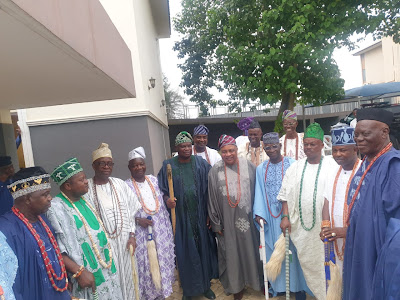 Speaking on behalf of the Ogun State Awori Obas, Kabiyesi Olota thanked HRM Oba Babatunde Ajayi FCA for the vibrant and equitable leadership he is showing since his emergence as the Chairman of the Ogun State Council of Obas. He assured Kabiyesi Akarigbo of their continuous support to Ogun State Obas Council under his able leadership. While stressing that the forum will remain resolute on their firm backing of the Ogun State Government led by the Executive Governor, Prince Adedapo Abiodun MFR in the collective bid of securing the future of the state.

The forum equally called the attention of Kabiyesi Akarigbo to some challenges facing the Aworis in the state and seized the occasion to thank His Majesty for extending his love all the time including the most recent gesture where he honored the invitation to participate as Royal Guest in the Awori Obas Retreat.

POLITICS: ‘I Wish You The Best,’ Buhari tells Shettima’ After Unveiling As APC VP Candidate

Responding, Kabiyesi Akarigbo commended Awori Obas for their commitments toward the development of the state and for their efforts in uniting the Aworis. Kabiyesi commended the forum for adding value to the Ogun State Council of Obas and their support to the State Government under the able leadership of the Executive Governor, Prince Adedapo Abiodun MFR.