Ara, the multi-talented and dynamic drummer, has concluded plans for the VIP premiere of her latest movie entitled- OSUNFUNKE which was shot with best high definition cameras in the tourist areas of ipinle omoluabi, Osogbo in Osun State with the support of the State Government bringing life and hope to the citizenry of the noble state.

The natural drummer and actor with a wide range of performances and acting prowess has an unending passion for the big screen and no wonder she has raised the ante with her personal project- OSUNFUNKE, presently a new movie like no other starring; Ricardo Agbor, Baba Wande, Doris Simeon, Yemi Shodimu, Peju Ogunmola, Ijesha, Femi Jacobs, Olamide Badoo, her humble self, Ara Olamuyiwa and directed by Dj Tee.

The logline disclosed that the movie tells the live of a lady from a royal family, the Adegbites who are the Arugba (Calabash Carrier) during the Osun Osogbo Festival and along the line during her days in school a terrible thing happened and right of being an Arugba was stripped of her. She met a guy after her NYSC who was one of the reasons she lost her position as an Arugba. The heat of attraction, betrayal, trust and a lonely window of deceit intersects as she struggles to deal with her festered past that consumes her present aspirations for so long.

Information has it that Ara is optimistic and of the opinion that Osogbo in Osun State has the best tourist attractions in the whole South-West of Nigeria, and exploring good ambience and serene environment created for the state by Ogbeni Rauf Aregbesola was one of the things that inspired the shooting of Osunfunke in Osogbo, Osun State.

Findings revealed that Ara is a perfectionist who possesses a solid work ethic and she is committed to achieving the highest standard of performance and always willing to listen and learn from others which are crystal clear from total package of her movie-Osunfunke set to be screened for notable celebrities, entertainer, media gurus, associates, fans and well-wishers from all facet of our society. 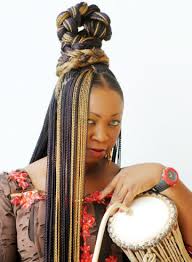 According to Ara, who enjoys cooking, helping the needy, promoting culture, travelling and watching TV, she divulged that every good movie lovers that has passion for tourism and culture deserve to be at the VIP screening for OSUNFUNKE.

Her being energetic and preparedness to go the extra mile to make a difference to any project she is involved in is an exemplary result of the masterpiece produced by her relentless efforts to make OSUNFUNKE a reality.

The much talked about VIP screening for the movie, OSUNFUNKE is billed to take place the month of September 2017 in Osogbo, Osun State.