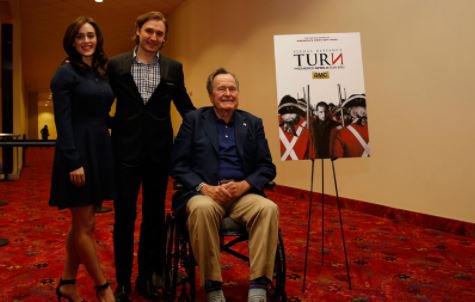 Lind stated the incident occurred in 2014 while posing for a photo with the ex-president at the screening of her movie ‘Turn’.

The actress claimed Bush ‘groped’ her from his wheelchair and shared a dirty joke with her.

“When I got the chance to meet George H.W. Bush four years ago to promote a historical television show I was working on, he sexually assaulted me while I was posing for a similar photo,” Lind was quoted.

“He didn’t shake my hand. He touched me from behind from his wheelchair with his wife Barbara by his side. He told me a dirty joke.”

A spokesman for the ex-president reacting to Lind’s allegations said it wasn’t an ‘intentional act of assault.’

Bush also apologised to the actress for the “distress” she may have felt as a result of his “attempt at humour”.

“President Bush would never under any circumstances intentionally cause anyone distress, and he most sincerely apologizes if his attempt at humor offended Ms. Lind.”

Recently, sexual harassment has been a major topic of discussion in America’s film industry.

Over 40 actresses have come out to accuse veteran Hollywood producer Harvey Weinstein of sexual assault.