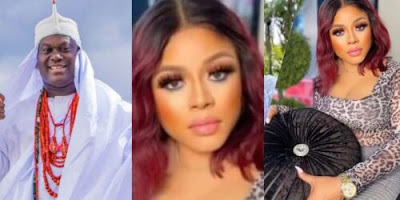 Emerging details have revealed there are speculations that the Ooni of Ife, Oba Enitan Adeyeye Ogunwusi is planning to marry another wife again.

This is coming barely 48 hours after the revered Monarch married his sixth wife, Princess Temitope Adesegun.

Reports have it that the Ooni is set to marry a seventh wife, Aridunu.

The Royal wedding is slated for the 29th of October.

Oba Enitan Adeyeye Ogunwusi had disclosed why he had been marrying several women for weeks now.

The Ooni while marking his 48th birthday and seventh coronation anniversary, had clarified why he married Mariam Anako and the others.

The Ooni explained that he tried making some changes but he couldn’t. Maybe referring to his decision to keep to only one queen and have concubines, the monarch said of the traditional heritage of Ile Ife,

If I had my way, I tried to challenge it but it blew in my face but thank God I’m still alive. It’s an institution that is rich in heritage, culture, and tradition.”

What To Know About Ooni’s Six New Queens

However, before the reported moves of the Ooni to pick the seventh wife, the 48-year-old monarch married six women in less than two months.

There are unconfirmed reports that Ooni will marry three more women, totalling nine before the year ends. Tales of incoming Aridunu may prove this to be true after all.

Many Nigerians are indeed surprised at the multiple marriages at a go. The unthinkable number of queens arriving the Ooni’s Palace in quick succession has caught the attention of many and also provoked a flurry of reactions.

While some feel his actions are in sync with traditional rites, he has drawn flak from others too.

Apart from Ooni’s many royal rumble, Ooni had a fair share of ‘romantic rumble’. He was previously married to Adebukola Bombata in 2008 but the marriage failed.

His marriage to Naomi Silekunola came to end abruptly in December 2021.

Naomi his estranged wife, who runs an interdenominational ministry based in Ondo State, said she tried to make the union work but the monarch’s public identity is at variance with “his true self”.

Ooni previously had a broken marriage in 2017 when he parted ways with her Edo-born wife, Zaynab-Otiti Obanor, who he married on March 16, 2016. The marriage only lasted for one year and five months.

While it appears Ooni is unfazed by the avalanche of criticisms that have trailed his marital actions so far, the monarch, not minding his hecklers, has forged ahead in ushering his new queen.

Below are the new queens and what you should know about them;

Olori Mariam is from Ebira ethnic group in Kogi State. She was traditionally married to the Ooni on September 6.

She worked at Nestoil Limited, an engineering, procurement, construction and commissioning company in the oil and gas sector.

According to reports, Olori Mariam lost her father at a young age and was reportedly brought up in the home of a former Inspector General of Police Mohammed Abubakar. Her mother is a retired police officer.

Not much is known about Elizabeth Akinmuda but she got married to Ooni in Magodo, Lagos.

She hails from Ondo State and is said to be a Scotland-based Electronic Data Processor.

According to available reports, Olori Phillips had worked for the Ooni for over six years before becoming his wife.

She is a fashion entrepreneur, a model and a graduate of Marine Science from the University of Lagos.
In 2012, she was crowned winner of the World Miss University Africa (WMUA) beauty pageant.

Olori Ashley is from the Lafogido ruling House of Ile-Ife.

The traditional wedding was held at the bride’s family house situated on Olubose Street, along Ede road, IIe-Ife, Osun state.

The entrepreneur is the founder of Ashley Adegoke Foundation, a Non-Governmental Organisation (NGO).

Princess Ronke is the great-granddaughter of the late Ooni Ajagun Ademiluyi.

She is a law graduate of West London University. In 2011 she founded Africa Fashion Week London, rated as one of the UK’S most significant annual fashion events that promote and nurture African and African-inspired design talent.

She has worked as the Personal Assistant to the late Secretary to the State Government, Princess Aderenle Adeniran-Ogunsanya.

Before that, she bagged diplomas in Linguistics and Data Processing from the University of Lagos in 1998 and 2000, respectively, and a bachelor’s in Business Administration from the same university.

In all of these, Ooni’s latest marital affairs have buried the Yoruba saying: “there is no respect for a king without a queen in the palace”