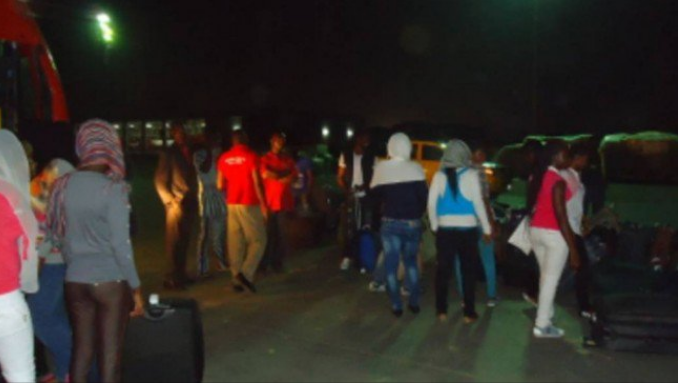 Some Nigerian returnees from Libya have recounted how they were sold as slaves in the country, with some claiming that their fellow countrymen were actively involved.

A report by CNN had uncovered auctions of Africans, including Nigerians, in Libya.

The report had generated global outcry and condemnation, with President Muhammadu Buhari ordering the evacuation of Nigerians stranded in the country.

Some of the returnees who spoke to PUNCH said Nigerians are also culpable in the slave trade.

“Nigerians and Libyans are doing the business like they are one big happy family,” Harrison Okotie, 32, who lived in Libya for three years until his repatriation, told the newspaper.

Sunday Anyaegbunam, another returnee, said they were sold twice by Nigerians during their nine-day journey through the desert.

Anyaegbunam, who hails from Edo state, left Nigeria along with his wife in April this year.

He said their Nigerian “burger” (trafficker) sold them to a set of Libyan traffickers at Agadez, Niger, where they were subsequently sold to another Nigerian who took them to Sabha, Libya.

It was at Sabha that they were separated in different cells, he said.

“We were made to contact our families on the phone and I had to ensure the payment of N400,000 for my release and N300,000 for my wife,” Anyaegbunam said.

“The Nigerians selling people in Libya are more wicked than many of the Arabs. I have never seen people so heartless as the Nigerians who bought and sold me.

“There are many of them in Agadez and Sabha, who are making so much money from selling their own people. But there are other West Africans doing the business too.

“When you approach them and say, ‘please, my brother, help me’, they would tell you, ‘no brother in the jungle.”

Esosa Osas, another Nigerian who was in Libya for six months, said she also met many Nigerians selling their countrymen but “you dare not talk to them, else they would beat you and lock you up.

“I noticed that the connection houses were also controlled by Nigerian women.”

‘WE SURVIVED ON URINE AND FUEL’

The returnees also recounted how their fate was that of survival of the fittest even though they left for the country for greener pastures.

Kelvin Sunday, 21, who was in Libya for seven months, said he had to raise N965,000 to get to Libya with the help of family and friends.

Sunday recounted how the vehicle conveying them through the desert developed an engine fault.

“We were in the desert for three days without food or water,” he said, adding: “We were drinking our urine to survive. It got to a point that when there was no more urine to drink, we started to drink fuel.”

The Libyan government has ordered an investigation into the alleged slave trade.