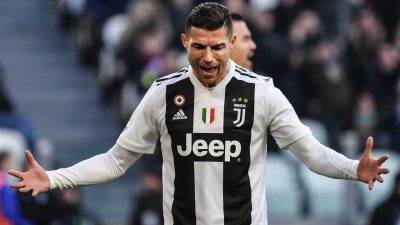 Ronaldo curled in the opener after just two minutes in Turin adding a second from the penalty spot after 66 minutes, putting the Portuguese top of Serie A’s scoring charts with 14 goals.

Fabio Quagliarella pulled Sampdoria level with a penalty after 33 minutes, with the visitors having a late Riccardo Saponara goal ruled offside after consultation with the video assistant referee.

Juventus open up a 12-point lead at the top of Serie A ahead of Napoli who can reduce the gap when they host Bologna later on Saturday.

The seven-time reigning champions also have a record number of points before the three-week winter break with 53 from 19 games.

“The team is doing very well, we had an excellent first half to the season, now we have to keep working to ensure we keep this form in the second half of the season,” Ronaldo told Sky Sport Italia.

“I like VAR, because these are difficult decisions for a referee and we should welcome anything that makes his job easier.”

The reigning champions have dropped points just twice this season, being held by Genoa at home and 2-2 against Atalanta midweek, and are firmly on track for an eighth consecutive Scudetto.

Ronaldo had come off the bench to score in Bergamo but returned to the starting line along with Miralem Pjanic.

And the Portuguese striker found a way through early picking up a Paulo Dybala cross to fire in past Sampdoria goalkeeper Emil Audero.

But Sampdoria pulled level following a penalty awarded when Emre Can handball with Quagliarella making no mistake past Mattia Perin in the Juventus goal.

The 35-year-old became the first player to score in nine consecutive Serie A games since David Trezeguet for Juventus in 2005.

Audero denied Dybala before the break with Mario Mandzukic missing a chance to finish off a Ronaldo cross.

The Sampdoria goalkeeper again deflected over a Ronaldo header on the hour but the hosts went ahead when the referee awarded a penalty for an Alex Ferrari handball off a corner after a VAR viewing.

Substitute Saponara looked to have grabbed a point in injury time but VAR ruled he was in an offside position and the goal was disallowed as Sampdoria stay fifth two points behind Lazio who occupy the final Champions League spot.

Inter Milan, in third, travel to Tuscany side Empoli later on Saturday without their fans after racism and violence overshadowed Christmas football in the Italian league.