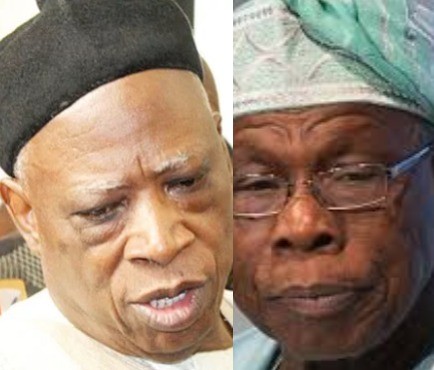 A former governor of Nasarawa State and Senator representing Nasarawa West District in the National Assembly, Abdullahi Adamu, has revealed the reason he attacked erstwhile President Olusegun Obasanjo, over a scathing letter he wrote to President Muhammadu Buhari urging him not to run for reelection in 2019.

According to Adamu, he added his voice to the debate over Obasanjo’s letter because he was part of the current government and any criticism on the Buhari-led administration is also an attack on his personal performance as a top government official.

He also said that nobody deployed him from the backdoor of the Presidency to do the other side of the attack on Obasanjo. Rather, he said that Obasanjo was biased and raised unfounded allegations that necessitated the criticisms he received from him.

He told Daily Trust NG: “What the government did under the leadership of President Buhari showed optimum maturity. Those of us who are not within the Presidency strongly believe that we have rights to make our opinions known on the issue.

“Between me, you and God, I say this with all honour; nobody made me say something about Obasanjo. If anything, I am known for how I stood by Obasanjo and how I supported him. What makes him think that he alone has the solutions to the problems of Nigeria? What qualifications does he have for this? In his first election (1999), he didn’t win one state in the entire South -West of the country, including his own state, Ogun.

“By 2003, he virtually went on his knees and made a deal with some governors that he would support them to get back their seats if they didn’t disgrace him. He betrayed them. The only governor that refused to be hoodwinked was Asiwaju Bola Tinubu who won his seat without the help of Obasanjo. The remaining governors lost their seats.

“I agree with the concept that you “look at the message and not the messenger.” But what is right in what the messenger is saying? For instance, why should he accuse Buhari of nepotism? The constitution of this country is clear enough. Buhari must have at least one minister from each state and he has done that. Take a look at the ministers and the portfolios they hold. I don’t believe that every ministry is equal. You can’t say that the Minister of Finance is on the same page with the Minister of Culture or Minister of Information. None of the key ministries (except that of Education and Agriculture) have leaders of northern extraction.

“If he (Obasanjo) was neutral or didn’t even make false allegations, I may not have responded the way I did. But he is throwing his weight around and people respect him because he is a former head of the country. I am close to him and I know him very well. Every government is not good enough, according to him. If he had solved the problems of this country, why then did he leave Yar’adua to inherit the kind of problems he did? If he succeeded in his economic policies, why did Jonathan have problems with the economy of this country? Obasanjo, in all good conscience, ruled this country for about 11 years and still couldn’t solve the problems of this country.

“I was a governor and I know what he tried to do, and if walls were to speak, go to house number seven in the Villa here and the walls would tell you what transpired there. The walls would tell you that he actually wanted a third term because he made attempts, many attempts to try to amend the Nigerian constitution such that it would enable him have tenure elongation.

“He tried to work on the party’s (PDP) constitution to see what it would be if he didn’t become the president so that he would have what we call soft landing.

“I am not a passerby in this; I was part and parcel of this movement, and we keep this thing because we have a duty to keep it as much as possible, you know. But when he comes to undo a whole government because it is Buhari, it is about this government. I said it in my release, except you want me to repeat it, that to an extent, he has not been called to answer. Look, I did mention Halliburton sometimes. I talked about Siemens. Did he play any role in the accusation of corruption and what have you? If not, let him come out and say he was not aware. There are some cases; what happened to those cases in Nigeria? Some of the people that are involved in those cases are languishing in jail in the United States of America. Some of the cases started here and nobody is hearing about them again.

“If Buhari wanted, if not for the respect he has for his predecessors, he would have put him on trial. What about the Bureau of Public Enterprises (BPE)? You know the privatisation that took place and got to him; let him come and let’s have an open enquiry on who played what part. What about Transcorp deals and the oil blocks in this country? He wants to tell us that he is a perfect angel, that there is no palm oil on his hands.”