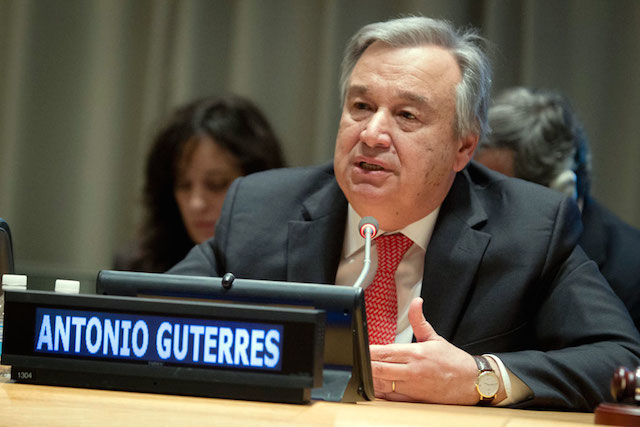 UN staff in Geneva are planning a half-day strike on Tuesday, as dozens of ministers and other dignitaries attend high-level events at the organisation’s European headquarters.

The strike is over pay cut.

“We have tried other forms of protest before, to no avail… They have left us no choice,” Ian Richards, who heads the UN staff unions association in Geneva, said on Sunday.

He said it remained unclear how many of some 9,500 UN staff members in Geneva would participate in Tuesday’s work stoppage, or what impact it would have, pointing out that “this is not like a bus company where the buses just stop.”

“But we certainly expect this to have an impact,” Richards said.

The half-day work stoppage will come during what is arguably one of the busiest weeks of the year at the UN in Geneva, with around 100 heads of state, government ministers and country representatives from around the world set to attend the main annual sessions of the UN’s top human rights and disarmament bodies.

Speaking on behalf of the UN in Geneva, spokeswoman Alessandra Vellucci told AFP in an email that staff should be “reminded that actions which disrupt or interfere with official activity of the Organisation may be considered contravening staff obligations.”

She stressed though that “UN Geneva recognises and respects the right of staff to freedom of association and acknowledges the dissatisfaction of staff” linked to pay cuts.

She said “contingency plans” had been put in place to “minimise the consequences of the possible work stoppage in a period of intense diplomatic activity” at the UN in Geneva.

According to a letter sent to all UN agency chiefs late last week, Tuesday will mark only “a first day of action, (and will) be followed by others.”

The letter, sent by the unions and representatives of civil servants working for the UN, went out as staff received their first pay slips showing a 3.5-percent salary cut, and with the knowledge that the cut will swell to five percent by June, Richards said.

The signatories said staff had “lost confidence” in the International Civil Service Commission (ICSC) — a body appointed by the UN General Assembly to govern UN employees which has ordered deep cuts to pay and benefits for many staff around the globe.