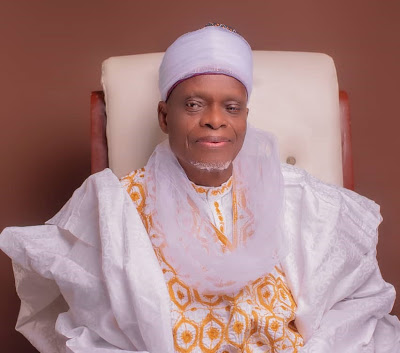 Sheik Nasirdeen Sa’adudeen Ajara (RTA) was born eight decades ago in Otta, Ogun State into the paternal and maternal families of noble Islamic clerics from Ilorin Kwara State, but lived most parts of his childhood years with his mother’s relatives in Ilorin alongside his revered mentor, his immediate elder brother of same parents, Sheik Sarafadeen Sa’adudeen Ajara (RTA).

Beautiful things don’t ask for attention because they naturally get it. This assertion aptly described these admirable Ajara brothers whom right from their formative years, depicted greatness, and were the pride of the neighbourhood and beyond under the tutelage of one of the most respected grand Sheik, ever to emerge from the Ilorin emirate, Mubashir Woleola (RTA).

Indeed, they are rare treasures to have come out of the same womb – a lofty desire of all mothers.

Sheik Woleola, an exceptional Islamic scholar with extreme commitment to Dawah who devoted his entire life to the propagation of Islam, meticulously trained Sheik Nasirdeen Sa’adudeen Ajara and his brother and imparted a great deal of knowledge to them.

It is on record that the late Sheik Woleola travelled across Nigeria in the course of Dawah, and while on these countless expeditions, often had Nasirdeen Sa’adudeen Ajara and others under his guidance in his train.

The spread of the noble religion, Islam, to almost every part of Nigeria, was not enough for the legendary Sheik Woleola as he stepped into bigger shoes by extending his Dawah quest to the West, Central and South African regions.

Some of the countries visited across Africa include Cameroun, Republic of Benin, Togo, Ghana, Côte d’Ivoire and Sierra Leone. Others are Congo DR, Zambia and Liberia.

Young Sa’adudeen Ajara was privileged to be part of these numerous sojourns across the continent travelling both on land and seas. His last trip with the grand Sheik was the journey to Monrovia, Liberia in 1961 after which he enrolled in the Arabic School of Sheik Kamaldeen Al-Daby in Ilorin, Kwara State after they returned for that year’s eid-el-kabir.

Sa’adudeen Ajara, having acquired basic foundation of Arabic and Islamic studies while he was with his guardian joined Baba Kamaldeen Al-Adaby’s Ile Kewu in June 1961 to further his quest for knowledge.

He was a member of the first set of students taught by Egyptian and renowned Nigerian Islamic scholars via Sheikh Kamaldeen relentless efforts.

Suffice to say the Aworiland is a destined abode for Nasirdeen Sa’dudeen Ajara after returning to his place of birth in 1970.

His journey back to Otta was prompted by the housewarming ceremony of the grand Sheikh Abdullah Alabi Olohungbebe (R.T.A) who was one of his most revered leaders and mentors. Nasirdeen Sa’dudeen Ajara, who has been in Lagos since 1967 after completing his studies, joined other family members from Lagos and Ilorin to felicitate with Olohugbebe on the opening of his new manor rooted in Otta.

After the event, Olohungbebe, being a conveyer of pilgrims to hajj, his primary business then, persuaded Sa’adudeen to stay behind and look after the family while he would be in Mecca.

He relocated to Otta permanently in 1971 when the journey till date began.

No gainsaying Sheik Sa’adudeen Ajara phenomenally become one of the greatest preachers of Islam in modern Nigeria and by extension in the West African Coast following his enviable foundation under the tutelage of legendary Islamic scholars like Sheikh Mubashir Woleola, Sheikh Kamaldeen Al-Adaby and Sheikh Ibrahim Alabi Olohungbebe. The trio, through the permission of ALLAH (S.W.T), contributed to the making of this living legend, hence, his unblemished chains of success as a Dawah icon and father.

His transformation to becoming revered Sheikh Al-Islam began in the 50s when he was under the scrupulous guidance of Baba Mubashir Woleola, a rare opportunity for all aspiring Islamic scholars at the time. He had the opportunity to travel far and wide with this great man – a perfect privilege for a solid foundation to becoming an enviable Sheik among Muslim faithful. Similarly, he gained more knowledge and art of preaching while in the school of Baba Kamaldeen between 1961 and 1967.

On arrival in Lagos in 1967, Sa’adudeen Ajara had several offers from various towns and cities across South West Region of Nigeria to work as Head of notable Islamic and Arabic Schools. He had offers from Ibadan, the south west region capital, Ijebu-Igbonhan, Lagos, and Otta among others but he chose the Aworiland amid multiple opportunities.

Why the choice of Otta among the lot? – First, Sa’adudeen Ajara was given birth to in Otta in 1941 while his parents were on Dawah odyssey, spreading the beauty of Islam across Nigeria. Secondly, of all the cities and towns job opportunities came from, it was only Otta that was yet to have a modern Islamic and Arabic school as at the time and thirdly, the remains of his late father, after he died in 1969, was interred in this Aworiland, hence, the choice of Otta among the lot.

Immediately after settling down in Otta along with his wives, Sa’aduden Ajara joined the Alhaji & Alhaja Group which had the late Sheikh Olohungbebe as its Missioner and later Baba Hibathullah. The Alhaji & Alhaja Group was an association comprising of Muslim faithful purposely organized to pray for intending Hajj pilgrims before their departure and after their arrival.

In 1971 when Baba Olohungbebe commissioned his first mosque, Sa’aduden Ajara was entrusted with writing the welcome address of the occasion which had highly revered Sheikh Niyas, who commissioned the project, in attendance. This famous event remains a significant point of reference in the history of propagation of Islam in Otta.

Barely a year he finally migrated to Otta. Sa’adudeen Ajara embarked on his first pilgrimage to Mecca in December 1972 after Sheik Olohugbebe had handed over to him The Alhaji & Alhaja Group. Incidentally, it was the same year his elder brother, Sheikh Sharafadeen Sa’adudeen Ajara also visited the holy land for the first time.

However, he has not been to hajj when he rose and started open preaching of Islam in the assemblies of the Alhaji & Alhaja group and other societies and associations in Otta, its environs and beyond.

Marvel at his oratory prowess, mammoth followers and admirers in hundreds always flood venues of his yearly Ramadan evening tafsir scrambling for seats to listen to his captivating sermons.

Under the leadership of Sheik Olohungbebe, the annual Ramadan evening tafsir was taken to every nooks and cranny of Otta for 24 years – 1971 to 1995. The exercise came to an end by the will of ALLAH (S.W.T) in 1995 when Sheikh Olohugbebe returned from a visit to the United Kingdom. Till date, the present venue for the evening tafsir has become a market of sort as it is always full to the brim every night of Ramadan even after the demise of Baba Olohungbebe who was the originator of the exercise in Otta.

Sa’adudeen Ajara led the Zumrat-ul-Ujaaj Arabic school from its inception in 1971. In 1973, prominent members like Alhaji Yakub Abdulsalam, Alhaji AbdulRaoufi from Ilorin, Alhaji Wazir Hibatuhllah who is now a lawyer, Alhaji Munir Haroon and Alhaji Yusuf Ibrahim among others joined him in the administration of the school until he retired as the head of the institution in December 1991.

After he left Zumrat-ul-Ujaajin 1991, he solely established Mujahideen in 1992 with three founding lecturers – His son, Alhaji Abdulrazak Sa’adudeen Ajara, who now resides in the United States, Sheik Barrister Ali Daudu and Shiek Kamaldeen Olohugbebe. The present head of the institution is Alfa Samsodeen Abdul Yekeen.

Besides Otta, his adopted home, Sheik Nasirdeen Sa’adudeen Ajara is famous across the country for his magniloquence skill and his style of narratives that simplify understanding the Holy Quran and teachings of the Holy Prophet Muhammed (S.A.W.). These natural abilities, no doubt, positioned him amid great scholars in modern Nigeria.

Sa’adudeen Ajara has been a reputable Islamic figure for over 50 years due to his preaching proficiency – he is aptly described as a wordsmith narrative and embodiment of wisdom, a status that earned him the title of Aafin Imo – (The Custodian of knowledge).

In 1975, Sheikh Nasirdeen Sa’adudeen Ajara was turbaned as The Aafin Imo of Aworiland by the former Chief Imam of Ota and also in 2014, was announced and turbaned as the Zonal Missioner (Western Zone) of Ilorin Descendants Progressive Union.