There is nothing like Onisango, impostor must be arrested – Olota of Otta 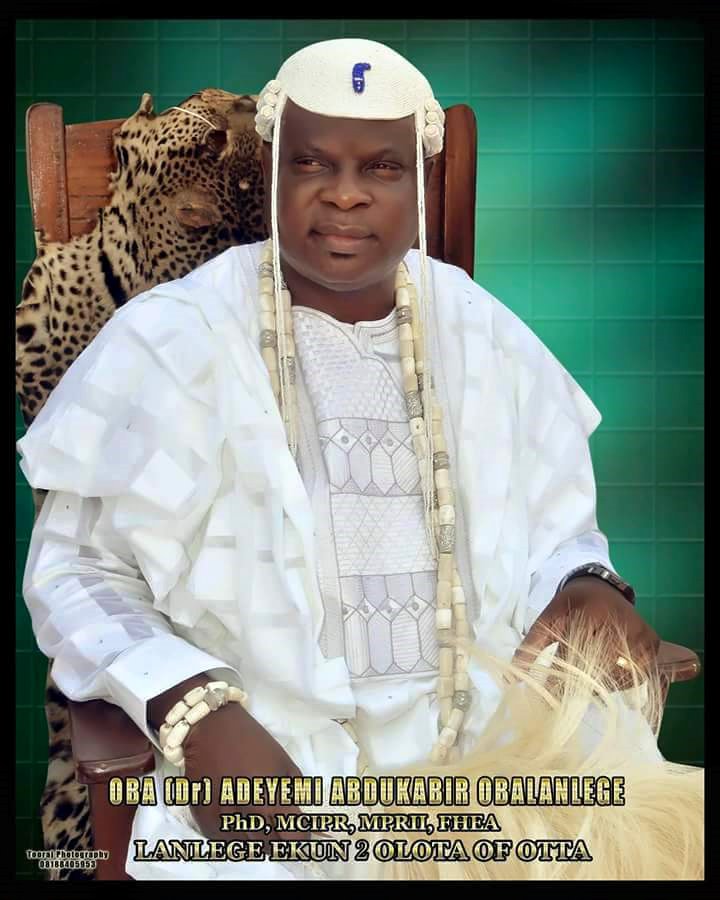 The Olota of Otta, His Royal Majesty, Oba(Prof.) Adeyemi Abdukabir Obalanlege has said one Mr Adebayo Oluwagbohun is an impostor and must be prosecuted for parading himself as Oba of Sango-Ota.

The Olota said in a statement made available to newsheadline247 that there is nothing like Onisango as such stool is neither known to Chieftaincy gazette nor laws of Ogun State.

But Oluwagbohun who has been insisting to be the Onisango recently at a function in Côte d’Ivoire appeared in royal regalia saying he was at the function to represent former President Olusegun Obasanjo.

According to a post with caption Onisango On International Duties on facebook by a group known as Sango Concern, Oluwagbohun Olatunji Adebayo was a guest of the Côte d’Ivoire government over the weekend.

The Sango Concern post on Facebook read “Oba Oluwagbohun Olatunji Adebayo was over the weekend a guest of the Côte d’Ivoire government at the launching of initiatives to promote natural issues in Africa States.

“During the launching, Oba Adebayo who chaired the occasion on behalf of chief Olusegun Obasanjo counseled that the Africa States should encourage the safety of our environment by going green.

“According to him, environmental degradation is a serious issue we are handling with levity.
Oba Adebayo’s versatility in the area of environmental issues marveled the media practitioners and participants at the occasion. He has since returned home,” the post stated.

With the latest development, Olota of Otta and the Olota In Council are said to be more concern over Oluwagbohun’s violation of court orders and has even gone as far as having the temerity to go outside the country to present himself as a royal father.

According to a statement signed by Prince Adeyemi Sulaimon Olusesi, the personal assistant and media aide to His Royal Majesty, Olota of Otta; “The attention of His Royal Majesty, the Olota of Otta, Oba(Prof.) Adeyemi Abdukabir Obalanlege and Olota-in-Council have been drawn to a press release by one Mr Adebayo Oluwagbohun claiming to be the Onisango of Sangoland at a function where he claimed to have gone to represent Chief Olusegun Obasanjo.

“To set the record straight, we do not have a king at Sango-Otta but a traditional head under Baale Wale Akilo. Hence, members of the public are hereby warned not to fall in the hands of an impostor claiming to be ONISANGO as such stool only exists in the imagination of some individuals who are swimming in foolery.

“The recent attitude of Adebayo Oluwagbohun is a blow to the judiciary system of the nation considering his continuous disobedience to the several rulings of a court of competent jurisdiction where it was clearly stated that Olugbohun must not parade himself as ONISANGO as such stool is neither known to the Ogun State Laws nor Chieftaincy gazette of Ogun State.”

Olota, the Arole of Iganmode and ruler of Awori Kingdom also appealed to the government of Ogun state urging it to order an immediate arrest of the impostor, Mr Oluwagbohun who have been alleged to have openly and continually defying court orders by parading himself as an Oba under the domain of Olota of Otta.

“We are appealing to Ogun State government under the leadership of our amiable Executive Governor, Senator Ibikunle Amosun FCA, CON who we all know as a peaceful leader in his capacity as the Chief Security Officer of Ogun State to order the immediate arrest of the impostor, Mr Adebayo Oluwagbohun.

“This is necessary as his continuous nuisance can no longer be tolerated by the Aworis. The Ijesha Man, Oluwagbohun is becoming a threat to the existing peace at Sango-Ota, Aworiland and this could affect one of the core cardinal agenda His Excellency “Security” if not tamed now.”

“The hard-working security agencies in Ogun State should place Impostor Adebayo Oluwagbohun on their watchlist to prevent break down of law and order in our dear state.

Aworis are known as respecters of law and order, the status we shall continue to uphold. To this end, we call for calm from everybody even in face of intimidation as efforts are in top gear to address the issue,” the statement said.