Trump: I can’t be impeached by Congress 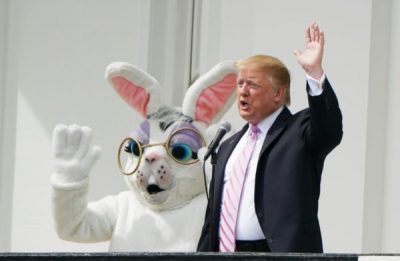 President Donald Trump said Monday that he cannot be impeached by Congress over the findings of the Mueller report into Russian election meddling and his alleged attempts to hamper the investigation.

Asked by reporters at a White House Easter egg event for children whether the prospect of impeachment worries him, Trump replied: “Not even a little bit.”

Defiantly insisting that he did nothing wrong, Trump also denied a portrait of dysfunction in the White House where disobedient aides are said to have saved him from committing obstruction of justice by refusing to carry out his instructions.

“Only high crimes and misdemeanours can lead to impeachment. There were no crimes by me (No Collusion, No Obstruction), so you can’t impeach,” Trump stated earlier on Twitter.

“It was the Democrats that committed the crimes, not your Republican President! Tables are finally turning on the Witch Hunt!” he said.

The Mueller report confirmed that Russian operatives had attempted to interfere in the 2016 election to help Trump beat Democratic candidate Hillary Clinton, including by hacking into email accounts.

The report also found that Trump’s campaign took advantage of the impact on Clinton, but did not deliberately reach out to collude with the Russians.

During the probe, Trump repeatedly tried to hamper Mueller’s work, the report said.

But Mueller did not rule one way or the other on whether Trump had committed the crime of obstruction of justice.

Democrats, who control the lower house of Congress, are so far mostly holding off from calling for impeachment proceedings.

However, powerful House committees plan to dig further into the scandal and are pushing to be given the whole Mueller report, without parts currently blacked out for security or legal reasons.

Trump is spinning the Mueller report as a complete exoneration. He has gone as far as saying repeatedly that the probe was a political hit job amounting to “treason” and “spying.”

Democrats, however, say that the report has demonstrated in detail that Trump is unfit for office, even if the evidence would be insufficient to prove crimes in court.

Whatever the truth, Mueller’s report has inflicted damage on the former real estate tycoon and reality TV showman’s reputation through stories of close aides maneuvering to stop the president from going too far in his attempts to slow down the probe.

“The President’s efforts to influence the investigation were mostly unsuccessful, but that is largely because the persons who surrounded the President declined to carry out orders or accede to his requests,” Mueller wrote in his report.

This narrative clearly annoys Trump, who has built a career on his image as a ruthless boss, famous during his television performances on “The Apprentice” for telling contestants: “You’re fired!”

Even though the aides allegedly disobeyed him so that they could prevent more serious damage, Trump denied Monday that any sort of insubordination would be possible.

“Nobody disobeys my orders,” he said at the Easter egg event.