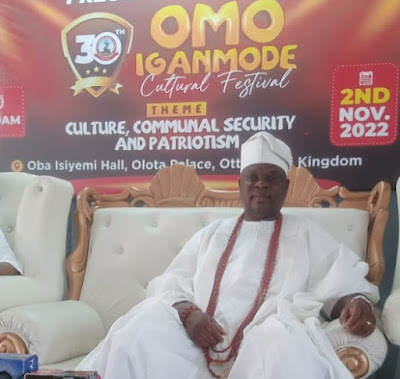 The focus should be on the basics of human existence and social organization, which allows us to develop a comparative theory of culture from its basic elements, the individual and the community

The Olota of Otta, Oba Prof. Adeyemi Abdukabir Obalanlege has described culture as an important veritable tool that can be used to tackle insecurity across the country saying there is need to “reinvent in our past” as people with rich tradition, ethics and values.

The Awori monarch made this known on Tuesday, November 2nd 2022, at the press briefing on the 2022 edition of Odun Omo Iganmodefestival held at the Oba Isiyemi Hall, Enu Owa, Olota’s Palace, Otta, Ogun State.

The theme of this year’s fiesta is tagged, “Culture, Communal Security and Patriotism”. The weeklong activity of the festival is scheduled to kick off on December 12, 2022.

While addressing pressmen ahead of the Awori people’s most popular festival, Oba Obalanlege pointed out that the people cannot keep standing aside and watch their values as humans being destroyed by criminal elements. “We cannot look on while our economic, historical and spiritual antecedents and heritage are pillage by a few of our social misfits called armed robbers, kidnappers, cattle rustlers, area boys, cultists and killer herdsmen take us for granted and assault us.”

“They are not spirits and we must fight them to a standstill. We cannot fold our arms and allow them a free rein. You and I have a responsibility to stop them before they stop us. They have already cast a great slur on our unity and a big doubt on our claim to patriotism.

“But we have not always been like this. There was a time when security used to be everybody’s business, when wealth was not a major determinant of status in society. It was a period when people despised questionable wealth and money rituals were scorned at. But nowadays, people celebrate barefaced thieves, land speculators, assassins, kidnappers etc,” he said.

Affirming his allegiance to the reinvention of culture as a communal way of battling insecurity and other forms of transgression, the revered monarch pointed out the defect of dismissing the importance of cultural differences due to movements towards “a globalized world where such differences were likely to disappear.”

He said, “As a man of Culture, I think we need to reinvent our past. Culture is a strongly underrated element in security policy and architecture. For some time we dismissed the importance of cultural differences, particularly since we seemed to be moving towards a globalized world where such differences were likely to disappear. Wearing trousers without belt that you call “low-waist” was used to denote criminals in the United States. But these differences have come back with a vengeance.

“Just like the increasing terrorist attacks, killer herdsmen and kidnapping have demonstrated, we have lost an element of our Culture that foster unity, that brings the patriotism in us. Then, we do not profile criminality based on ethnic origin. Today, we seem to be demonizing the Fulanis for all, whereas some of these criminal elements have accomplices and masterminds among people of our ethnic stocks.”

In his submission, the Awori royal father stated that, “It is my take therefore that we properly undertake a dissection of culture demands and situate through a strongly interdisciplinary approach that in a world of rapid, almost inexorable information age we will neglect scientific enquiry or intercultural trainings for solution to our security problems at our own peril. Culture is not static, but is an ongoing process.

“When we use the term in the plural it should be an indication that culture must be understood on different levels. We must look at the culture of an individual, then of the family into which he or she was born. There is also the culture of a city, a region, and a nation.

“The focus should be on the basics of human existence and social organization, which allows us to develop a comparative theory of culture from its basic elements, the individual and the community.”

Chairman Central Planning Committee of Iganmode Cultural Festival, Aare Ayodele Bankole, was one of the dignitaries at the press conference.

Aare Bankole, a prominent Otta chief, while addressing newsmen on the much anticipated festival in Aworiland also added that “the theme of the 2022 cultural fiesta seeks to address and identify the important role of Culture, its influence in driving communal security and the nudge to promote patriotism.

“There is no way this theme will not address the ancestral hero, IGANMODE and those irrepressible Awori warriors. Their exploits in history have become the staying power and spirituality of Otta-Awori Kingdom dedicated to celebrating her hero, “Iganmode” and promoting the exquisite culture and tradition of the Aworis.”

The Chairman, Ado-Odo-Ota Local Government, Hon. Sherif Musa, who was also at the press meeting applauded Oba Obalanlege and the head of the planning committee, Aare Bankole on multiple unprecedent feats achieved in recent editions of the festival.

Mr Musa pledged absolute support from the council for a successful outing of the 2022 Iganmode cultural festival.