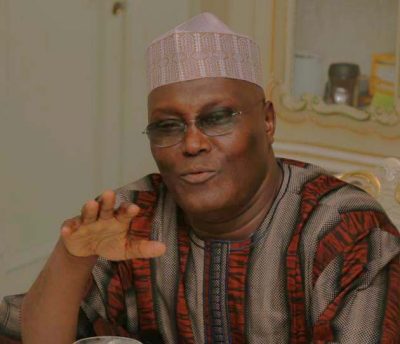 There were fears among the All Progressives Congress chieftains on Friday, following the defection of former Vice-President Atiku Abubakar from the ruling party.

According to Saturday Punch, the APC was expecting  Atiku’s exit, it dawned on it on Friday that the former vice-president’s action could lead to mass defection from the ruling party.

It was learnt that the fears were worsened by the feeling of some leaders of the party that the fate of the Peoples Democratic Party in 2014 could befall the APC before the 2019 elections.

In 2014, the PDP was weakened following the exit of some governors and National Assembly members, including a former Kano State Governor, Rabiu Kwankwaso;  ex-Rivers State Governor,  Rotimi Amaechi; Senator Bukola Saraki, and the then Speaker of the  House of Representatives, Aminu Tambuwal.

Saturday Punch reported that chieftains of the APC, who opened up  on Friday, said although the ruling party had been waiting for Atiku’s defection, it was uncomfortable with the fact that there were many aggrieved members who would soon dump the party in power.

One of the party leaders cited Kwankwaso and a former Lagos State governor, Asiwaju Bola Tinubu, as two of those who were not happy with the way the party was being run.

He said more than two years after coming to power, President Muhammadu Buhari had not made appointments that would bring into government those who worked for his election.

The chieftain also said that associates of the President including the Chief of Staff, Mr. Abba Kyari and Buhari’s nephew, Maman Daura, “have constituted themselves into a powerful cabal. They take key decisions in this government. Those who ensured  Buhari’s election have been sidelined. If the APC and the Presidency dismiss Atiku’s defection, they are not realistic. There are fears that the party may crumble. Apart from the Minister of Women Affairs, Aisha Alhassan, there are other appointees of this government that are supporters of Atiku.”

In a statement on Friday morning,  Atiku explained why he left the APC. He said that while other parties had purged themselves of the arbitrariness and unconstitutionality, the ruling party adopted same practices.

He  stated that the ruling party had  instituted  “a regime of a draconian clampdown on all forms of democracy within the party and the government it produced.”

Atiku disclosed the decision to leave the ruling party in a statement he personally signed.

He went down memory lane to recall that on  December 19, 2013, he hosted members of the APC in his house in Abuja.

He said the party members were there to appeal to him to join the APC after he left the PDP  because of the crisis emanating from the special convention of the former ruling party on  August 31, 2013.

He recalled that he and several of his loyalists were left in limbo at the time the APC came calling.

Atiku said, “It was under this cloud that members of the APC made the appeal to me to join their party, with the promise that the injustices and failure to abide by its own constitution which had dogged the then PDP, would not be replicated in the APC and with the assurance that the vision of the founding fathers, which I had for the PDP, could be actualised through the All Progressives Congress.

“It was on the basis of this invitation and the assurances made to me that I, being party-less at that time, due to the fractionalisation of my party, accepted on February 2, 2014, the hand of fellowship given to me by the All Progressives Congress.

“On that day, I said ‘it is the struggle for democracy and constitutionalism and service to my country and my people that are driving my choice and my decision” to accept the invitation to join the All Progressives Congress.”

Explaining the reason behind his decision to leave the APC, Atiku said events, which unfolded soon after the party took power, proved his earlier optimism was misplaced. He said like any other human and many other Nigerians, he was fallible.

To buttress his point, the former vice-president said, “Only last year, a governor produced by the party wrote a secret memorandum to the President which ended up being leaked. In that memo,  he admitted that the All Progressives Congress had ‘not only failed to manage expectations of a populace that expected overnight ‘change’ but has failed to deliver even mundane matters of governance.”

“Of the party itself, that same governor said,  ‘Mr. President, sir your relationship with the national leadership of the party, both the formal (NWC) and informal (Asiwaju Bola Tinubu, Atiku Abubakar, Rabiu Musa Kwankwaso), and former governors of ANPP, PDP (that joined us) and ACN, is perceived by most observers to be at best frosty. Many of them are aggrieved due to what they consider the total absence of consultations with them on your part and those you have assigned such duties.”

He expressed disappointment that since the memorandum was written, nothing had been done to address the issues raised in it till this day.

Atiku accused the party of making false promises especially to those who were invited to join.

“More importantly, the party we put in place has failed and continues to fail our people, especially our young people. How can we have a federal cabinet without even one single youth?

“A party that does not take the youth into account is a dying party. The future belongs to young people,” he said.

Atiku noted that he and the others who accepted the invitation to join the APC were eager to make positive changes for the country but that “we fell for a mirage.”

He further explained that he arrived at the decision to leave the APC after due consultation with his God, family, supporters and the Nigerian people from all walks of life.

It is not surprising –NWC  member

Reacting to the development, the APC  National Vice -Chairman (South-South), Hilliard Eta, told Saturday PUNCH via the telephone that Atiku’s resignation did not come to most party members as a surprise.

He said, “It does not come to us as a surprise because it has been in the media long before now that he is leaving to join the PDP. All the drama is not necessary.”

In a response to a question on whether the party would miss the ex-vice president, he said, “Well, you cannot say one will not miss a person of the status of a former vice president, but I doubt if his absence from the APC will adversely affect our electoral fortunes.”

A member of the party’s National Working Committee,  who spoke on condition of anonymity,  said, “It has been long in coming.  He complained secretly and in the open. He was ignored.

“Instead of seeking to address his concerns, hawks within the government went after his business interests. If you are in his shoes, what will you do?

“There are issues no doubt and I have yet to see any genuine efforts address these issues.”

Another NWC member, who also spoke on condition of anonymity, said,  “The former VP has his supporters within the party.  Some were just waiting for him to lead and they will follow. As elections approach, there are people that will definitely leave and we expect others to also join us.  You can’t stop this from happening.  That is the nature of politics.”

When contacted,  the APC National Publicity Secretary, Mallam Bolaji Abdullahi, said, the party was waiting to see the number of people that would follow Atiku.

He stated, “A loss of fortune is in numbers.  If we are able to see the number of people that would follow the former Vice-President to his new party that is when we will begin to worry,  but we have not seen that. So, when we see, we will know whether we need to worry or not. It is about the number.”

Abdullahi,  who said politics was about interest,  stated that the party had not got any formal notification of Atiku’s resignation.

According to him,  “If the former vice-president feels that his interest is better served elsewhere, we can always wish him good luck.

“For us, the task of building a political party is not a day’s job.  It is a  marathon and it takes many years and we will continue to improve our system until we are able to get the kind of party that we want to really build.

“It takes many years to build a strong political party. In a new party, you find some people are happy, some people are not so happy and everybody would have to take their decisions at some point. So, we don’t have anything to say rather than to wish the former vice-president good luck.”