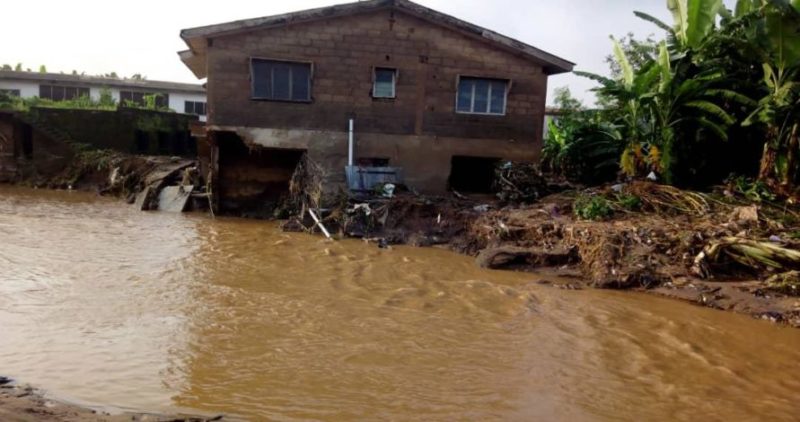 No fewer than five persons were feared dead and property worth millions of naira destroyed on Friday night, as flood wreaked havoc in some parts of Abeokuta, Ogun capital.

The downpour, which started around 4 p.m. and stopped by 9 p.m, caused river channels in the capital city to overflow their banks resulting in loss of lives and sweeping away of several vehicles.

NAN gathered that three of the persons who were killed was a food vendor and her two children, whose container shop was swept away by the flood around Kobiti Central Mosque area of Abeokuta.

An eyewitness told NAN that the food vendor, Halirat Akintobi and her two sons, were hiding inside the container when the downpour started and were later trapped in the shop.

The three victims were, however, reported to have been buried on Saturday morning in accordance with the Islamic rite.

NAN also gathered that corpses of the two children were also reportedly recovered from Sokori River in Iya Amolaso area of Abeokuta.

Somuyiwa Bisola, a shop owner at Amolaso area while narrating her ordeal, told NAN that the flood destroyed her shop and swept away her goods worth N5million.

She explained that her warehouse, which was stocked with a trailer load of soft drinks on Wednesday, was also pulled down by the flood.

The Chairman of the Pain chapter of the Nigerian Red Cross Society, Mr Joseph Obalanlege, who was on an assessment tour of the affected areas, described the development as “highly devastating”.

He added that the corpses of the persons killed by the flood had been deposited at the morgue of the State Hospital, Ijaye.

The Commissioner of Police in the state, Ahmed Iliyasu, who could not ascertain the number of deaths, said the police had joined other disaster management agencies in ameliorating the situation.

The Assistant Chief Planning Officer, National Emergency Management Agency (NEMA), Southwest Zone, Babatunde Olowookere, said that the agency was working out plans to assist those affected by the flood.

He said that the situation was aggravated by those building structures on water channels and dumping of refuse in drains.

The state Commissioner for Environment, Bolaji Oyeleye, attributed the development to indiscriminate dumping of refuse by residents into drains and waterways.

Oyeleye said that the state government had earlier embarked on dredging of rivers, canals and clearing of drains in the state.

He urged residents of the state to inculcate the habit of disposing of their refuse properly and desist from dumping refuse indiscriminately.

NAN reports that the Nigeria Meteorological Agency (NiMet) had in its forecast earlier in the year, listed Ogun as one of the states that would experience downpour.