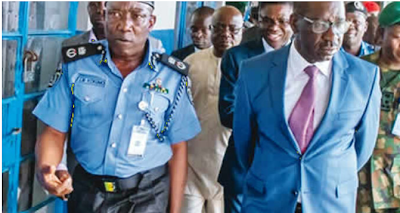 The Policemen in Edo State have reportedly left their duty posts across the state which subsequently led to the breakdown of law and order following the crisis that emanated from the #EndSARS protest.

Police stations were attacked during the crisis, and 1,993 inmates reportedly escaped in jailbreaks at the Benin and Oko prisons.

Obaseki, during a solidarity visit to the Commissioner of Police in the state, Johnson Kokumo, on Monday, promised that his government would pay the hospital bill for officers who were injured during the crisis.

“Edo state government will now proceed immediately to begin to rebuild your destroyed building. We already ordered some patrol vehicles and we hope it will be delivered in the next few weeks. We will responsible for the hospital bills of officers injured in the last few weeks,” he said.

“Every inmate that escape from our correctional centres will be arrested. Hoodlums burnt the centres thinking they have destroyed particulars of escapees but they don’t know that their biometrics were not within the centres.”

Kokumo in his reaction disclosed that the command arrested 126 criminal suspects, and that out of the numbers 10 of them were inmates who escaped from the prisons in the state.

The police chief also said that about 11 of their personnel were injured and that 10 of them have been discharged from the hospital while one is still at the University of Benin Teaching Hospital.