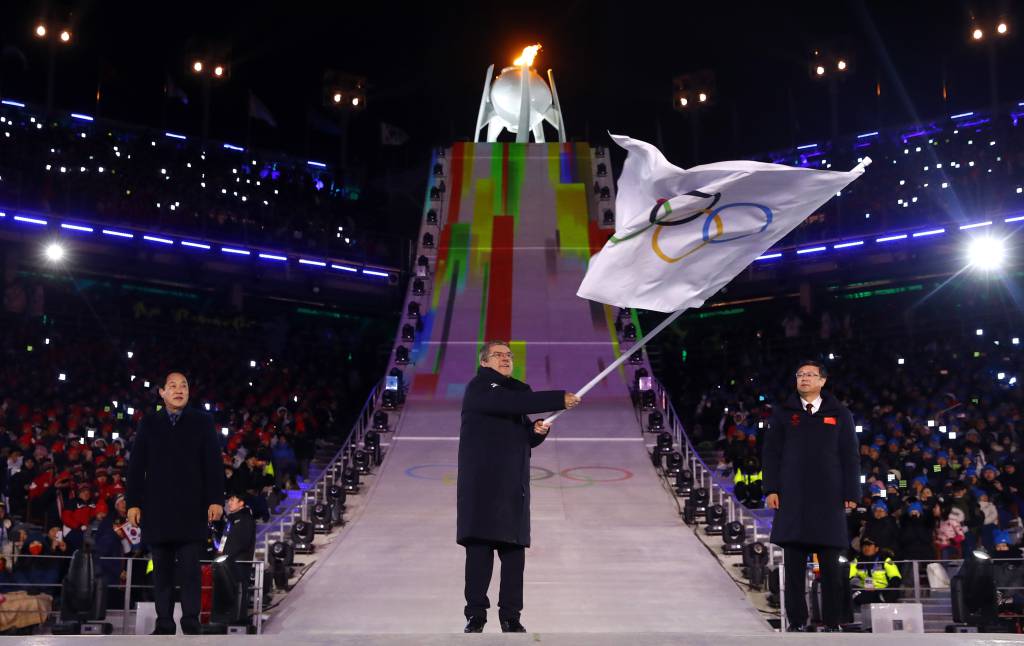 North and South Korea marched behind their own flags as the curtain fell Sunday on two weeks of competition against a backdrop of diplomatic manoeuvring at the Pyeongchang Winter Olympics.

Unlike the Games’ opening, the North and South Korean athletes marched separately and waving their national flags, although some North Koreans held the blue-and-white Korean Unification emblem.

US President Donald Trump’s daughter Ivanka was just a few seats away from North Korea’s Kim Yong Chol, who is accused of masterminding attacks on South Korea and is blacklisted by Seoul.

As the show got underway, South Korea’s presidential Blue House relayed that Chol’s delegation had said North Korea was “very willing” to hold talks with America.

It was the latest conciliatory move by North Korea during the Games, where Kim Jong Un’s sister attended the opening ceremony and the two Koreas formed their first joint Olympic team, in women’s ice hockey.

After a successful drone display — following an aborted attempt at the opening ceremony, where recorded images were broadcast instead — International Olympic Committee president Thomas Bach handed out medals from the final day.

Topless Tongan cross-country skier Pita Taufatofua made a cameo appearance, greased in his trademark coconut oil, before Bach declared the Games — one of the coldest on record — closed.

“The Olympic Winter Games Pyeongchang 2018 are the Games of new horizons,” he added.

It was a fitting send-off for the Games and for Bjoergen, 37, who completes her Olympic career with a record-breaking 15 medals and was one of the stars of the 16 days of competition.

Germany and Norway both finished on 14 golds, but the Norwegians took top spot with their record 39 medals overall to Germany’s 31. Canada were third with 11 golds, while hosts South Korea are seventh.

Although they didn’t get to wave their flag at the closing ceremony, it was a triumphant day for Russia after their men’s hockey team beat Germany in the final — and then defiantly sang  their national anthem on the ice.

Russia sent 168 athletes to compete as neutrals after Russia’s national Olympic committee was banned for mass doping. However, two of the competitors failed drugs test.

The International Olympic Committee voted on Sunday to keep Russia’s suspension in place until the other 166 Russians are cleared of doping in Pyeongchang.

The Russian Olympic Committee said it expected the ban to be lifted “within the next few days”. During the closing ceremony, chants of “Rossiya (Russia)” could be heard.

Attention now turns to Tokyo, host of the 2020 Summer Olympics, while the Winter Games also stays in Asia with Beijing holding the next edition in 2022.