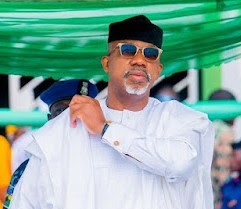 The Ogun State Governor, Prince Dapo Abiodun, has indicated the readiness of the state to host the 22nd Edition of the National Sports Festival (NSF) in 2024.

In a statement by the Governor’s Chief Press Secretary, kunle Somorin, Gov. Abiodun gave this indication when he played host to the 22nd National Sport Festival Evaluation Committee, in his office in Abeokuta on Friday.

Gov Abiodun expressed his conviction that no other state can defeat Ogun in its plans to host the festival after almost 16 years it hosted it.

Abiodun, while noting that Ogun is one of the most peaceful states in the country, urged the committee to make security, peaceful atmosphere and the well-being of the athletes the most important consideration above others.

“Our state is the Gateway State and I do not think that any other state can compete and defeat us in the bidding for this National Sport Festival.

“So, on behalf of my team, I want to assure you that we will be ready to host this Sports Festival. I want to thank the Minister of Sports and Youth Development, Mr Sunday Dare. And I have told him, we are hosting this festival, we are ready for it.

“I think a festival like this, one of your topmost considerations should be a venue where you can guarantee the safety of the athletes and also the visitors. I think that consideration ranks higher than any other consideration, it has to be number one and once you take that on your check list, you can begin to look at other areas.

The governor who added that his administration sees the development of the sport sector as very important as it helps to instill discipline, leadership skills and also helps the youths to stay clear from social vices, said that hosting of the festival is fundamental to the social economic development of the state.

” We see the sport sector as a sector that we must promote because sport itself instills discipline in our youths, if you are preparing for any sporting activity, you are required to be disciplined, you have to wake up at a certain time to train, you have to develop interpersonal skills, once you are subjected to those kind of rigorous training exercises, you are less likely to engage in vices because you won’t have time,” he noted

Abiodun stated that if the state could host a business concern of $400m in the Special Agro-Industrial Processing Zone at a period when the exchange rate of the Naira to other foreign currencies is a bit epileptic, affirmed that the state is more than ready to host the festival.

” If we are ready for a business person at a time like this when there is a world recession, at a time when there are baseless speculations that we have security threats, at a time when our exchange rate of a Naira to other foreign currencies is a bit epileptic, if an investor is coming to Ogun state and investing $400m in our state, then, it says a lot.

The State governor while assuring the committee that the state owned international airport would have become operational before the commencement of the festival, also said that all observations made by the committee would be looked into.

” Let me assure you that whatever it is that you require, we have tourist sites, cultural heritage sites, by the grace of God, way before the National Sport Festival, our International Airport will be ready, so our athletes do not have to worry about flying to another state like they did in 2006 and driving to Ogun State. They can fly straight into Ogun State and within twenty five minutes, they are at any of the venues driving on first class five star highways.

” Yes, you are here to inspect our sporting facilities, what I want to assure you of is that whatever observation that you find, whatever recommendation you make thereof, be doubly assured that we will take them on board and all those facilities will be ready and they will be best in class,” he said.

Earlier in his remarks, the leader of the 22nd National Sport Festival Evaluation Committee and also the Director, National Sport Festival/Para Sport Department, Ministry of Youths and Sports; Peter Nelson, who commended the state government for showing interest to host the 22nd edition of the festival, opined that the state can surpass its record of being the only state to have hosted and made a huge profit, if it gets the nod to host the event.

” I hope and pray that when we go for the inspection, the things that we see in sight will be impressive that I think we should be able to give Ogun State another chance to host like we did to Edo sometimes ago and also Lagos.

“I am so sure that if they put things in place, there is no doubt in my mind that Ogun State should be able to repeat what they did in 2006 as the only state that ever hosted sports festival and made profit. This time around, I expect that it should be much better and I am expecting that the preparation should be much better than what we saw the last time,” he said.

Nelson while noting that if the state is able to get things right, it would win the bidding process, urged the state government to ensure that accomodations are not too far from the venues.

A former Commissioner for Youths Sport in the state, Bukola Olopade, while expressing optimism that the state would win the bid to host the festival in 2024, said that he looked forward to a successful bidding process.