HomeForeignTrump insists – ‘I concede nothing’, despite admitting Biden’s victory
Foreign

Trump insists – ‘I concede nothing’, despite admitting Biden’s victory 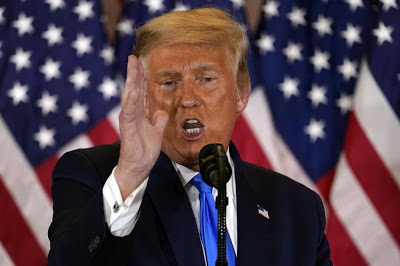 President Donald Trump of the United States on Sunday insisted he is not conceding the presidential election despite accepting defeat by Democrat’s Joe Biden.

Trump, had for the first time acknowledged that Biden won but swiftly added that the election was rigged.

“He won because the Election was Rigged. NO VOTE WATCHERS OR OBSERVERS allowed,” he stated via his Twitter handle.

The American president, as the statement went viral, sais Biden was victorious “in the eyes of the fake news media.”

“He only won in the eyes of the FAKE NEWS MEDIA. I concede NOTHING! We have a long way to go. This was a RIGGED ELECTION!” he wrote.

Joe Biden was declared president-elect after polling more than 270 electoral votes, the threshold needed to win.

But Trump has maintained that “the election is far from over” since the time Biden was announced the winner.

“The simple fact is this election is far from over. Joe Biden has not been certified as the winner of any states, let alone any of the highly contested states headed for mandatory recounts, or states where our campaign has valid and legitimate legal challenges that could determine the ultimate victor,” he had said in a statement.

President Trump is also claiming that the Republican Party was shut out of the electoral process.

He maintained that votes by mail—much of which contributed to Biden’s victory—were illegal and should not have been counted.

The United States Federal Election Coordinating Council had also maintained that there is no evidence of rigging or corrupt voting system in the just concluded election in the country.