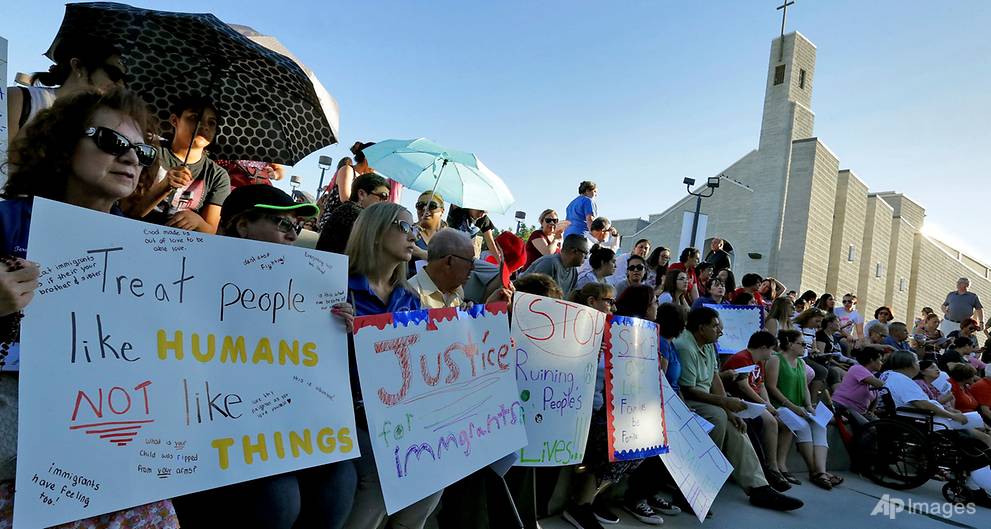 Central American migrants deported from the US without their children spoke of their anguish at seeing their families split under President Donald Trump’s “zero tolerance” approach Saturday, as protesters kept up the pressure against the “barbaric” policy.

Trump on Wednesday ordered an end to the family separations which have sparked domestic and global outrage, but some 2,300 children had already been separated by then.

More than 500 children have already been reunited with family members, according to a fact sheet released by the Department of Homeland Security on Saturday.

“The United States government knows the location of all children in its custody and is working to reunite them with their families,” the department said.

How quickly the rest of the reunifications can be carried out remains a major question. Lawyers working to bring families back together said they were struggling through a labyrinthine process — while more migrants continue to arrive.

Ever Sierra, deported after trying to enter the US, told AFP he planned to try again in a few days.

He arrived back in Honduras with his eight-month-old daughter’s shoes hanging from his backpack. She was being held in a detention center in McAllen, Texas, along with her mother.

Benjamin Raymundo, a 33-year-old who was deported back to Guatemala, told AFP he left his home country in April with his five-year-old son Roberto, but the pair were separated when they were stopped by immigration officers in California.

A brother-in-law who lives in the US and a lawyer managed to find the child’s whereabouts and the boy was eventually placed in this relative’s custody.

“It’s a great sadness for me, as if I’ll never see my son again,” he lamented. Raymundo said he has no plans for now to return to the United States. He hopes his son will be granted asylum.

In an effort to staunch the flow of tens of thousands of migrants from Central America and Mexico arriving at the southern boundary every month, Trump in early May had ordered that all those crossing the border illegally would be arrested, and their children held separately as a result.

In an about-face, he then ordered an end to the splitting up of parents and children, saying it was administration policy to “maintain family unity… where appropriate and consistent with law and available resources.”

“I didn’t like the sight or the feeling of families being separated,” he said.

Protests continue
Democratic lawmakers kept up the pressure Saturday, with roughly two dozen of them visiting a detention facility where children are being held.

Jackie Speier, a California congresswoman, toured the facility in McAllen, Texas. In a televised news conference, she said she saw children “under the age of five who were segregated from their parents and were crying… They’re in cells and in cages.”

Another California congresswoman, Barbara Lee, added: “The children especially are traumatized,” and she called the Trump administration’s immigration policy “barbaric.”

Protest marches were scheduled this weekend in several cities, and advocacy groups called for a nationwide “Families Belong Together” protest on June 30.

In San Diego, around 1,500 demonstrators gathered, with many wearing jackets featuring the statement “We really care, do you?” — referencing Melania Trump’s jacket emblazoned with “I really don’t care. Do U?”

Yolanda Torres, who arrived in the US from Mexico aged nine, told AFP: “We arrived with nothing, we didn’t even have a place to sleep.

“I don’t want to imagine if they had locked me in fencing.”

Reflecting the breadth and complexity of the challenge, the document orders the department’s preparedness and response office — which deals with emergencies and public health disasters — to assist its refugee resettlement office with the effort.

Politico quoted HHS spokesperson Evelyn Stauffer as saying that Azar was “bringing to bear all the relevant resources of the department in order to assist in the reunification or placement of unaccompanied alien children and teenagers with a parent or appropriate sponsor.”

The department did not immediately respond to an AFP request for confirmation.

The Pentagon is making contingency plans to house thousands of arrivals on US military bases. Defense Department officials said as many as 20,000 could be sheltered on bases in Texas, Arkansas and New Mexico if need be.

Nearly all of the arriving families have officially requested asylum, citing the high levels of violence in their home countries.

The separations have reportedly sparked intense debate even within the White House — but Trump has remained unapologetic, accusing his political rivals of exaggerating the problem for political gain.

“Open Borders Democrats… just want everyone to be released into our country no matter how dangerous they are,” he said in his weekly address Saturday, again trying to link immigrants with crime.

“They can be killers, they can be thieves, they can be horrible people — the Democrats say it’s okay for them to be in our country. I don’t think so.”