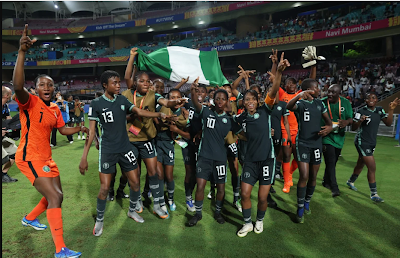 Nigeria’s U-17 women’s national team, The Flamingos, have defeated their United States counterparts via a penalty shootout in the quarterfinals of the ongoing FIFA U-17 Women’s World Cup in India.

The Flamingos had never made it past this stage since the competition’s inception and faced a steep test against the free-scoring Americans. Still, the game, which was delayed for over two hours due to bad weather, proved to be always under control.

The Nigerian girls defeated the Americans 4-3 on penalties to book a place in the semi-finals at the 2022 FIFA U-17 Women’s World Cup in India.

The game ended in a 1-1 draw after 90 minutes of thrilling football action.

It’s the first time the Flamingos would make it to the last four in the history of the competition.

Edafe Omamuso gave Nigeria the lead on 26 minutes after Aminat Bello was fouled inside the box.

The Americans battled back with Amalia Villarreal netting the equaliser in the 40th minute after Comfort Folorunsho deflected her shot beyond goalkeeper Faith Omilana.

Both teams failed to register a goal in the second half and a penalty shootout was needed to determine the winner.

The Flamingos made it through after converting four of their five spot kicks, while the Americans netted three.

The Confederation of African Football (CAF), the team’s victory against the United States of America, thumbed up the Flamingos.

“Well done girls You made us all proud today 🤩